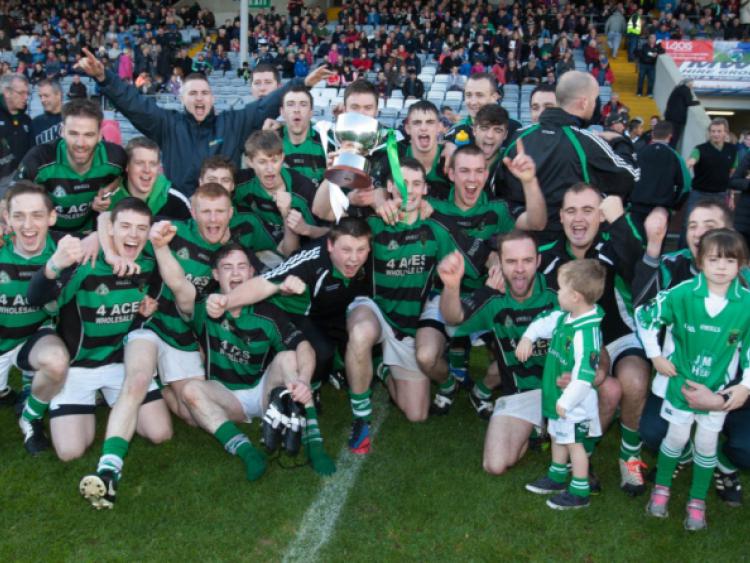 Ballyfin produced a stunning team performance to upset the odds and claim an eleven point win over Timahoe in O’Moore Park on Sunday.

Ballyfin produced a stunning team performance to upset the odds and claim an eleven point win over Timahoe in O’Moore Park on Sunday.

A hat-trick from teenage corner-forward Sean Moore was just one of the many highlights on the day for Ballyfin, who made history by qualifying for the Laois SFC for the first time ever.

It is a remarkable achievement for a rural dual club, and it is the least they deserved after a brilliant performance in the final.

Timahoe were red-hot favourites coming into the game, but they had no answer to the energy Ballyfin brought to the game. They were out-fought and out-worked across the field.

While Moore caught the eye with his haul of 3-3 at corner-forward, he was just one Ballyfin player amongst many who performed on the biggest stage. James Finn, who cancelled a trip to climb Mount Kilimanjaro to captain Ballyfin in the final, lead his team superbly. And in the end, he got to climb the steps in O’Moore Park to claim the trophy. Not a bad consolation.

Ciaran Fingleton and Darragh Connolly were excellent in defence as well, while Ricky Quillinan caused havoc in the Timahoe full-back line. In the end, however, it simply boiled down to work rate. Ballyfin worked an awful lot harder on the day.

For Timahoe, it will be a painful inquest after this. It is the worst defeat they have suffered for some time, and it’s not the sort of thing you just bounce back from. A tough winter lies ahead.

In the early stages of this game it looked like things were going to go to form, as Timahoe, with wind advantage, made a bright start. A couple of nervy wides preceded Damien O’Connor opening the scoring in the third minute. Ballyfin, meanwhile, came roaring into the game a couple of minutes later.

Ricky Quillinan bustled his way past Conor Lennon, and while his shot for goal was saved, Sean Moore was on hand to tap home the rebound for his first goal of the game.

Timahoe didn’t panic, and in time got the next score of the game, as Ruairí O’Connor slotted over a free. Sean Moore then won a free for Ballyfin, which James Moore tapped over, but Timahoe hit the next two points to level the game. Padraig Clancy got the first and Ruairí O’Connor got the other as Timahoe enjoyed their best spell of the game, and they went ahead thanks to a fantastic point from way out on the right wing by Damien O’Connor.

They could have extended their lead further only for Míchael Kerr’s goal effort to slip by the far post, and Ballyfin made them pay. A long ball into the Timahoe penalty area fell kindly for Sean Moore, and he got there before Eoin Culleton before rounding the ‘keeper and shooting into an empty net.

Robbie Foyle hit back for Timahoe with a point less than a minute later, but points from Sean Moore and Ricky Quillinan saw Ballyfin lead 2-3 to 0-6 at the break, and they would have wind advantage in the second half.

Timahoe pointed a free in the opening minute of the half, from Ruairí O’Connor, but that would be the last score they registered in the game. It was all Ballyfin after that.

Sean Moore opened their account for the half when he was set up by a quick free from James Finn, and Finn himself then had a goal chance which was well saved by Eoin Culleton. Disaster struck for Timahoe after that, as Sean Ramsbottom was shown a straight red card for a clash with James Finn, and they were deep in the mire now.

Ballyfin did what any good team would do in that situation, and they pressed home the advantage, starting with a point from James Moore. Sean Moore pointed once more a minute later, before James found the target for his third point with a free.

Louis Duff pushed the lead out to seven with a nice point from 25 yards out and even though there was 15 minutes left, Timahoe looked like a team that knew they were beaten.

It was all but confirmed with the next score, as James Finn intercepted a pass and ran sixty yards down field before offloading to Sean Moore, and he clamly side footed the ball into the bottom corner to send the Ballyfin crowd into raptures.

Louise Duff fisted over another point, the last of the game, and there was still time for Paul Holohan to make a point-blank save on Padraig Clancy, as Eddie Kinsella’s full-time whistle spraked joyous scenes for Ballyfin.