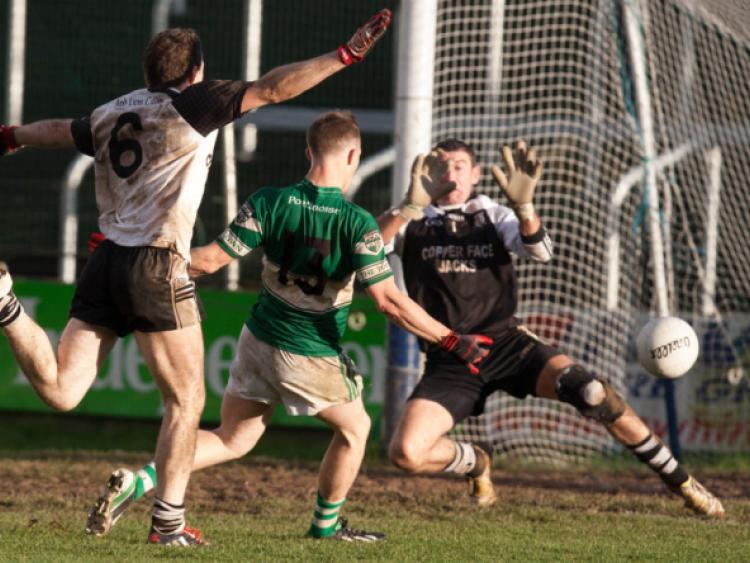 This was the final where Portlaoise, peerless in Laois for the last seven years, were supposed to be at their most vulnerable against an Arles-Killeen side with a point to prove.

This was the final where Portlaoise, peerless in Laois for the last seven years, were supposed to be at their most vulnerable against an Arles-Killeen side with a point to prove.

Portlaoise’s form had been poor this year by their own very high standards and the conventional wisdom was that the seven times defending champions were there for the taking.

What transpired on Sunday in O’Moore Park was starkly different to what many expected as this was as comfortable and clinical a victory as Portlaoise have had on their current run of unprecedented success.

Two goals in injury-time did put a gloss on the result and gave them their biggest winning margin over the eight finals but, even allowing for those scores, Portlaoise were never troubled from the time they first took the lead in the 20th minute. By the 37th minute, they were seven points to the good having scored six unanswered and from there it was a case of closing out the game.

They had come in for criticism during the year but they silenced their doubters on Sunday with a performance full of endeavour that put to bed any speculation that Portlaoise may have been lacking motivation as they went for eight in a row.

The pressure on the Arles-Killeen player in possession was relentless from start to finish and when Portlaoise invariably turned over the ball, they attacked with a pace and precision that was in stark contrast to the indecision and lack of inventiveness from their opponents.

Killeen were their own worst enemies throughout taking three steps backwards for every one they took forward. Their default setting in attack was to stop, turn around and look for a backwards or lateral pass instead of pushing forward. As a result, they allowed their opponents to funnel players back and get their shape in defence which made it virtually impossible for them to break through. Time and again their passing was poor under pressure and they gifted Portlaoise points from turnovers, including three from short kick-outs.

Even on the rare occasion they got the ball into the attacking third, their forwards were reluctant to shoot and, a result, they only scored once from play during the entire game.

Portlaoise were quite content to let Killeen play that way and their backs were rarely challenged up to the closing minutes when Killeen finally forced to attack.

The game was far from a classic and only really sparked to life in the closing minutes. The pattern of the game to that point was set early and never changed until the game was done as a contest.

Killeen were ponderous, building slowly from the back with a large number of short passes inside their own half. Portlaoise pressured the ball high up the field, looking to create turnovers and Killeen obliged by carrying the ball into contact. When Portlaoise invariably won the ball, they were incisive and attacked with pace. The absence of Zach Tuohy had little effect on Portlaoise as Paul Cahillane led the line superbly finishing the game with 1-4.

Stuart Nerney was an unsung hero in the middle of the field, denying Killeen any primary possession and forcing them to use short kick outs.

Killeen led by 0-3 to 0-1 after nine minutes with points from frees from Paul Kingston (2) and Jason Enright (1). Portlaoise’s early point came from Craig Rogers. Even though they held the early lead, Arles-Killeen’s short passing game was getting them in trouble although Portlaoise didn’t capitalise on early turnovers.

That began to change as the game progressed with points from Rogers and Garrett Dillon drawing Portlaoise level by the 17th minute. The defending champions had struggled for scores in the early going but by the 20th minute they had edged in front with Paul Cahillane pointing a close range free after he was fouled.

In the closing stages of the half, they pulled clear with three quick points with Conor Boyle, Stuart Nerney and Bruno McCormack all finding the target. McCormack’s point came straight from an ill advised Killeen short kick-out.

A superb point from Paul Cahillane at the start of the second-half was cancelled out by a Paul Kingston free but Portlaoise responded with two frees from Craig Rogers and another Bruno McCormack point from another poorly worked short kick-out from Arles-Killeen.

That left seven between the sides but after Conor Boyle was black carded, Adrian Kelly had already seen black in the first-half, Killeen reduced the gap to five with frees from Paul Kingston and Jason Enright.

After two more points for Portlaoise, one from close range point from David Seale and another free from Paul Cahillane, Killeen finally got their first point from play with 51 minutes on the clock through Donie Kingston.

Cahillane responded with a free for Portlaoise but Killeen were back within five late in the game after frees from Enright and Donie Kingston. Donie Brennan almost hit a goal when he volleyed a dropping ball into the side netting.

With the game looking more like rugby late in the game as scrums developed in front of the Portlaoise goal, space was created at the other end and Paul Cahillane took advantage in style with a super solo goal to remove any doubt over the result.

The icing on the cake came deep into injury-time as Ricky Maher finished another Portlaoise break with a goal with his first and only touch of the game.