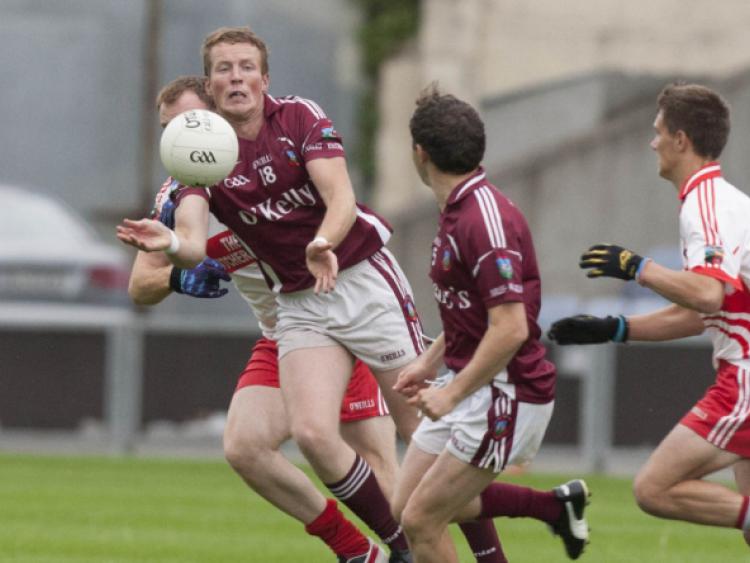 Despite being outscored by six points to no score in the last 23 minutes by a resurgent Emo side, Arles Kilcruise managed to scramble their way into the second round thanks largely to an impressive scoring burst either side of half-time.

Despite being outscored by six points to no score in the last 23 minutes by a resurgent Emo side, Arles Kilcruise managed to scramble their way into the second round thanks largely to an impressive scoring burst either side of half-time.

Emo had their noses in front after 25 minutes by a point at 0-6 to 0-5 but Arles Kilcruise scored 1-6 without reply in the next 12 minutes either side of the break to open up what turned out to be just about an unassailable lead.

The goal from David Conway with 28 minutes on the clock proved to be the decisive score of the game as it helped give Arles Kilcruise, beaten finalists in three of the last four years, just enough breathing space to hold on for the win.

Arles-Kilcruise turned their energy to defending in the closing stages and for much of the last ten minutes left just Ross Munnelly in the Emo side of the field. While it was a dicey game, particularly with Emo peppering in high balls in the dying minutes looking for a match winning goal, it also proved to be an effective game as they held on for the win.

On a gloomy, windy evening in O’Moore Park, interspersed with heavy showers, there was little to chose between the sides in the opening exchanges. Emo started their three inter-county players, Darren Strong, Evan Costello and Billy Sheehan in the full-forward line but as the game progressed Strong and Sheehan gradually moved further out the field.

Chris Conway and Darren Strong exchanged early points before David Conway and francis Egan edged Arles Kilcruise two points ahead. A well taken point from Billy Sheehan reduced the deficit to one but two points from Ross Munnelly, one from a free left three between them midway through the half.

With both sides playing with extra defenders, space was at a premium but Emo kicked the next three points, two from Paul Lawlor and one from Billy Sheehan to draw level again with 20 minutes elapsed. They went ahead for the first time in the game after 23 minutes when Nigel Murphy did well to slot the ball over the bar but by the time they would score again, they would find themselves eight points behind.

A fine point off his left foot from Francis Egan started the scoring run with a Chris Conway free edging Arles-Kilcruise back in front. Two minutes before half-time the gap was suddenly four when David Conway picked up a lose ball close to the Emo goal and applied a powerful finish to the back of the net.

Jason McLoughlin should have added a second goal but he rattled the crossbar from close range but Chris Conway picked up the pieces and slotted the ball over the bar. Ross Munnelly added a free before Maurice Deegan blew the half-time whistle and two more shortly after the restart from Chris Conway left Arles-Kilcrusie 1-11 to 0-6 ahead and the game looked to be as good as over as the rain teemed down under the floodlights in O’Moore Park.

However they would not add to that total for the rest of the game as they switched to defensive mode and Emo to their credit kept fighting gradually clawing their way back into contention.

Points from Evan Costello and Darren Strong left them still six adrift with seven minutes remaining but they continued to press and two more Costello frees along with a point from Johnny Booth left them within a score entering a lengthy spell injury-time due to an injury to Paul Lawlor who was thankfully able to continue after a serious looking bang on the head.

Emo laid siege to the Arles-Kilcruise goal in injury-time with a series of high balls but Arles-Kilcruise resisted the aerial bombardment with Emo managing just one  further point from another Evan Costello free leaving them still two adrift at the final whistle.