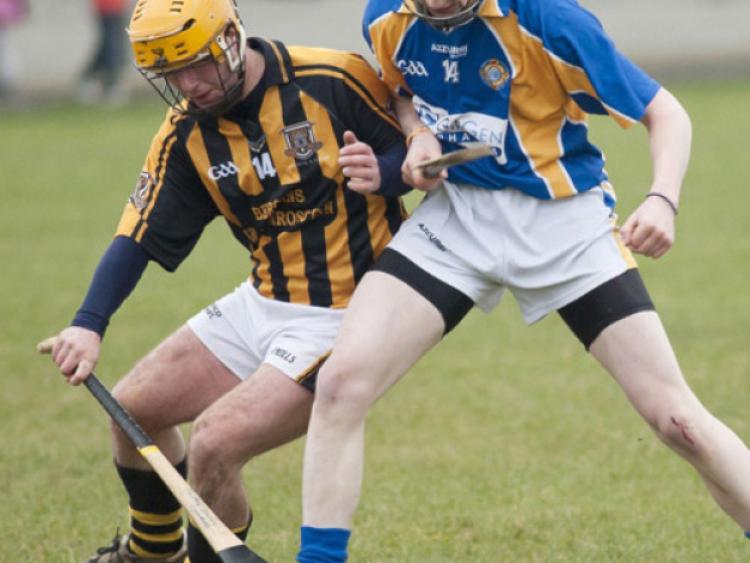 Having fallen victim to the weather on Saturday, the Palmer Cup final took place on Sunday evening with Clough-Ballacolla recovering from an early scare to see off the challenge of Camross with five points to spare in a thrilling conclusion to the Palmer Cup.

Having fallen victim to the weather on Saturday, the Palmer Cup final took place on Sunday evening with Clough-Ballacolla recovering from an early scare to see off the challenge of Camross with five points to spare in a thrilling conclusion to the Palmer Cup.

Clough-Ballacolla opened the scoring with a minute on the clock, with midfielder Bill Duggan rounding off a fine move with a point from range to set the scoreboard in motion. Camross wasted no time with their reply, as a mere thirty seconds later Tadhg Doran rattled the Clough-Ballacolla net to push them in-front.

Clough-Ballacolla replied from the resulting puck-out with Shane Hanlon firing over his first of the day from distance to reduce the margin to the minimum after two minutes of play. Camross went forward to stun the opposition once again, with Aaron Moore grabbing their second goal in two minutes, before Daniel Lalor raised the white flag to ease Camross in to an early five point cushion.

Clough-Ballacolla quickly set about dismantling the Camross lead and did so with a brace of points from their powerful midfielder Bill Duggan. Further points from Shane Hanlon and Damian Bergin left just a point separating the sides as Clough-Ballacolla eased their way back into the game.

It remained level at the break but Clough-Ballacolla’s momentum in the latter stages of the first half carried through, and early points Aidan Doyle, Ciaran Finane and Pat McEvoy gave them the lead for the first time since the opening minute.

Camross grabbed what was to be their first and last score of the second half after forty-six minutes, with Dean Delaney slotting a free from the right flank. Clough-Ballacolla continued to push forward and attack, resulting in Aidan Doyle’s second point of the day as Ballacolla restored their three point cushion.

With five minutes to go, and three points separating the sides, Camross were handed a lifeline with a penalty. Unfortunately for them, Thomas Dunphy’s blistering shot wasn’t enough to get past Clough-Ballacolla goalkeeper Danny Hanlon.

Clough-Ballacolla saw out the game with a quick-fire double from Damian Bergin to see them cruise to a comfortable five point victory, as well as pick up some silverware early in the year.