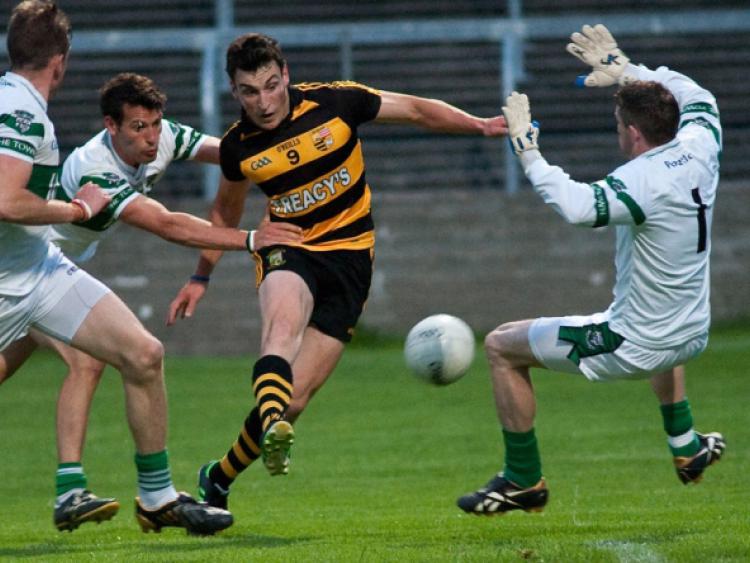 Most who attended this first round encounter between these two local rivals did so in the presumption that this would be a nice opener for Portlaoise to dust off the championship cobwebs.

Most who attended this first round encounter between these two local rivals did so in the presumption that this would be a nice opener for Portlaoise to dust off the championship cobwebs.

Given The Heaths patchy league performance there was little to suggest that this game would be competitive, but championship football is a different animal in comparison to its league counterpart and it was The Heath who left O’Moore Park on Friday night wondering what might have been.

A dominant second half performance saw The Heath just come up short and it was the reigning champions, aided by two outstanding second half Mickey Nolan saves, who took the spoils on a score line of 1-8 to 0-9.

The Heath were quickest out of the starting blocks and within two minutes centre back Dennis Booth registered the game’s first score, a thirty five yard driven effort which sailed over the bar with plenty to spare from underneath the stand.

Two scores in a row for The Heath in the ninth and twelfth minutes, the first a free from Jimmy Nerney, the second a neatly taken score from Aiden Bergin was further evidence that The Heath were in no mood to roll over.

The unfamiliarity of trailing by two points seemed to spring ‘the Town’ into action and they wrestled the dominance from The Heath in the second quarter of the first half.

A superb forty yard effort from McCormack in the fifteenth minute followed by a converted free by the former Laois star a minute later saw the teams draw level.

Portlaoise keeper Mickey Nolan followed the examples of many inter-county net minders this summer by slotting over an impressive ’45 in the twenty seventh minute and McCormack finished the first half scoring with a well taken free to leave the score 0-5 to 0-3 in favour of the reigning champions at half time.

No doubt there were some harsh words exchanged in the Portlaoise dressing room at half time as within the first minute after the restart they had the ball in the back of The Heath’s net.

Spurred on by Fitzpatrick’s goal Portlaoise continued their dominance and two further McCormack points in the thirty third and thirty fifth minutes extended their lead to seven and it looked like Portlaoise were going to stroll to the finish.

The Heath had no such plans and hit four unanswered points over the next 10 minutes to re-establish a foothold in the game leaving the scoreboard reading 1-7 to 0-7 entering the final quarter, the impressive Robert Dowling’s thirty yard effort being the highlight of this quartet.

With thirteen minutes left on the clock, Portlaoise keeper Mickey Nolan was called to make the first of two point blank saves.

Dowling managed to weave his way through the Town rear-guard and hit a low pile driver which Nolan superbly batted away to safety.

Nolan was called into action again five minutes later in an almost carbon copy of the first denial, this time it was Ciaran Booth who was thwarted when Nolan smothered his goal bound effort.

The rebound was flashed over by Dowling for the last score of the game with Portlaoise just holding out to claim a unconvincingly narrow opening win. Graiguecullen are next up for Portlaoise in Round 2.