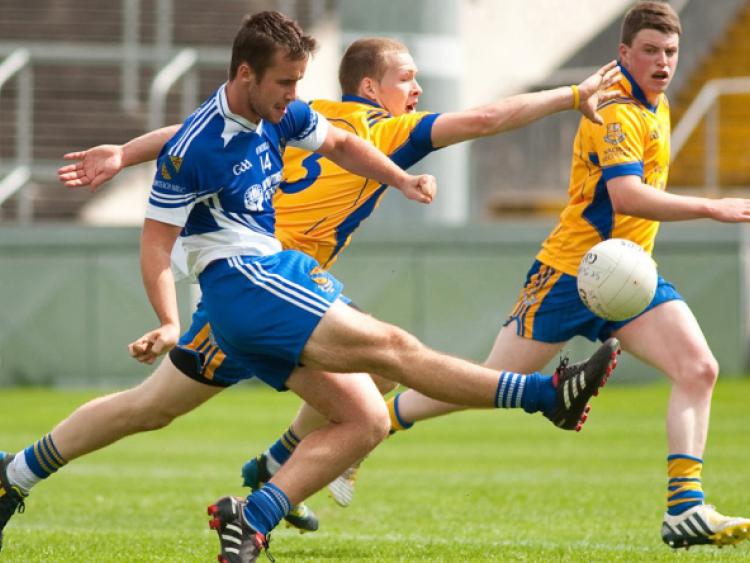 In the curtain-raiser in O’Moore Park on Sunday morning, Mountmellick opened their 2013 Championship campaign with a hugely impressive six point victory over St Joseph’s thanks to a memorable display from two-goal hero, Darragh Hanlon.

In the curtain-raiser in O’Moore Park on Sunday morning, Mountmellick opened their 2013 Championship campaign with a hugely impressive six point victory over St Joseph’s thanks to a memorable display from two-goal hero, Darragh Hanlon.

St Joseph’s started the better of the two sides and registered the opening three points of the game. Full-forward Colin Campion set the scoreboard in motion with a minute on the clock as he perfectly stroked over his first opportunity of the game. Minutes later he almost lobbed the ‘keeper only to see his shot scrape over the crossbar. Josephs’ excellent opening six minutes was completed with a short range free from James Doyle to put them three points ahead.

Joseph’s continued to dominate the opening stages as Eoin George’s stray pass around the middle of the park was collected by Michael Byrne who in-turn laid the ball off to Jason Campion. He was brought down as he was about to pull the trigger on goal leaving referee Maurice Deegan with no option but to award a penalty. James Doyle stepped up to take the penalty and nestled the ball into the bottom right corner of Adam O’Reilly’s goal to raise the green flag to see Joseph’s lead by 1-3 to 0-0 after twelve minutes.

However just as Joseph’s appeared to be cruising to a facile victory, Mountmellick finally woke up and dominated the remainder of the opening half. They went on to register 1-6 in the remaining fifteen minutes of the half, while also holding St Joseph’s scoreless

They started off their revival with Colm Coss’ goal-bound shot coming back off the post. Niall Mullen registered their first point of the day after fourteen minutes from a short range free before Darragh Hanlon hit the crossbar from six yards. Hanlon redeemed himself seconds later as he collected the rebound and steered it over the bar.

Hanlon went on to the lead the show for Mountmellick as he played a role in nearly every one of their following scores. With seventeen minutes on the clock centre-back Darren Fitzpatrick soloed through the Joseph’s defence before laying the ball off to Hanlon who instinctively buried it into the bottom corner of the net to bring the gap to the minimum.

Hanlon followed up with a free on the twenty-five minute mark, while Karl Donoher, Conn Maher and Niall Mullen increased the Mountmellick tally to 1-6 to see them lead by three points at the break following a stunning turnaround.

Mountmellick carried their momentum into the second half and within a minute of the restart they had raised the green flag yet for the second time in the game. Again it was Darragh Hanlon the scorer as the towering full-forward blasted the ball into the roof of the net to increase his tally to 2-2 for the day.

Mountmellick continued to build on their lead with Niall Mullen and Karl Donoher adding points to increase their lead to eight points with five minutes gone in the second half. St Joseph’s registered their first score in twenty-six minutes when James Doyle dummied his marker before splitting the posts. He then played a pinpoint pass to Michael Keogh for the corner-forward’s first point of the day.

Joseph’s continued to chip away at the Mountmellick lead and a Liam Kealy goal and a point from James Doyle reduced the gap to two points but Mountmellick pressed on and reclaimed their control on the game.

Joseph’s simply ran out of steam as Mountmellick notched on six points in the closing stages to put the result beyond doubt and to book a next round clash against O’Dempsey’s.