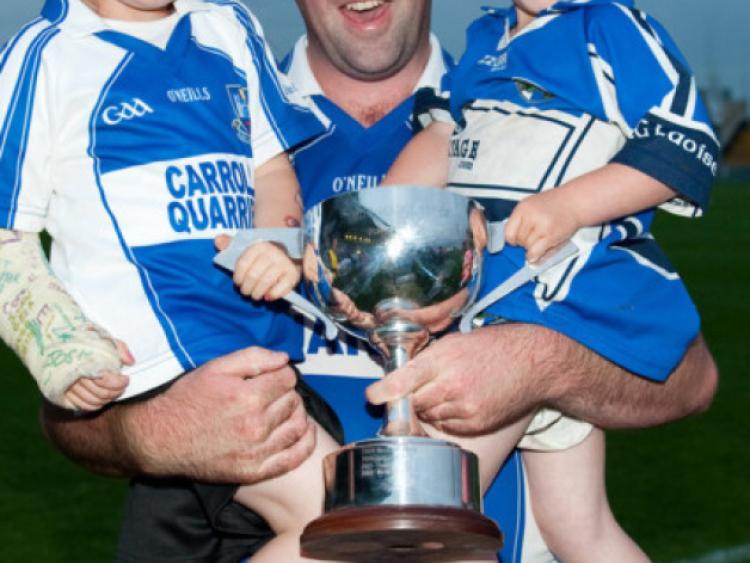 A powerful second-half performance was enough to edge Castletown Slieve Bloom past a dogged Abbeyleix side and hand Joe Heffernan’s men the Junior ‘B’ title.

A powerful second-half performance was enough to edge Castletown Slieve Bloom past a dogged Abbeyleix side and hand Joe Heffernan’s men the Junior ‘B’ title.

Before a small yet vocal crowd in O’Moore Park on Wednesday night last, the Castletown men pulled clear of their opponents after the break to run out five point winners, and it was a deserved victory spearheaded by a superb display right through the spine of their fifteen.

Keeper John Lyons made some crucial second half saves, Paul Heffernan and Shane Farrell were immense in the heart of defence, John Paul Campion top-scored with a fine array of frees while Paul Harding ploughed tirelessly to unsettle the St Lazerian’s defence.

Indeed, it was Harding who got the scoreboard rolling with a fine early point, and despite conceding a fifth minute goal Castletown hit back shortly after.

Abbeyleix’s Shane Fennelly enjoyed a fine first half and his neat free cancelled out that early Harding score before going one better by pouncing on a loose ball to drive a fierce shot into the back of the net from twenty yards out.

Undeterred, Castletown responded instantly with a goal of their own to level the scores, and it came from an unlikely source.

There seemed little danger as keeper John Lyons launched a monstrous free from his own circle but his opposite number Bob Cole lost sight of it somewhere along its journey and before he knew it the ball whizzed past him and into the back of the net.

Three points on the bounce from Abbeyleix were answered by three of the same from Castletown and despite an equalising point from the impressive Shane Fennelly, John Paul Campion had the final say of the half with an injury time ’65 to leave Castletown with the slenderest of leads at the break on a 1-6 to 1-5 scoreline.

Campion missed an early chance to extend that lead with one of his only missed frees of the night straight after the restart but John Palmer made amends a minute later.

Campion then rediscovered his pinpoint accuracy with two excellent scores in as many minutes, both struck from his own half and both with plenty to spare.

Abbeyleix were now trailing by four and seemed to be letting the title slip away but to their credit they hit back ten minutes into the second half with another three point salvo.

Tim Bonham was the provider of all three, capitalising on a period of sloppiness from Castletown Slieve Bloom that resulted in three frees, each of which were launched straight over the bar by the Abbeyleix marksman.

John Paul Campion edged his side ahead with another fine free before the crucial score of the game all but settled the tie.

Bob Cole attempted to make some clearing room for himself with fifteen minutes left on the clock but the keeper’s path was blocked and when the ball broke free Tadgh Drea was on hand to pull a low shot into the bottom left hand corner of the Abbeyleix net.

That left five between them and no matter how hard Abbeyleix tried they couldn’t bridge that gap.

That was in no small part down to the exploits of John Lyons who pulled off a string of fine saves to keep Abbeyleix at bay.

Two late points from Anthony Coffey were cancelled out by scores at the other end from Brendan Cuddy and John Paul Campion as the lead remained at five points, and the title was on its way to Castletown Slieve Bloom.