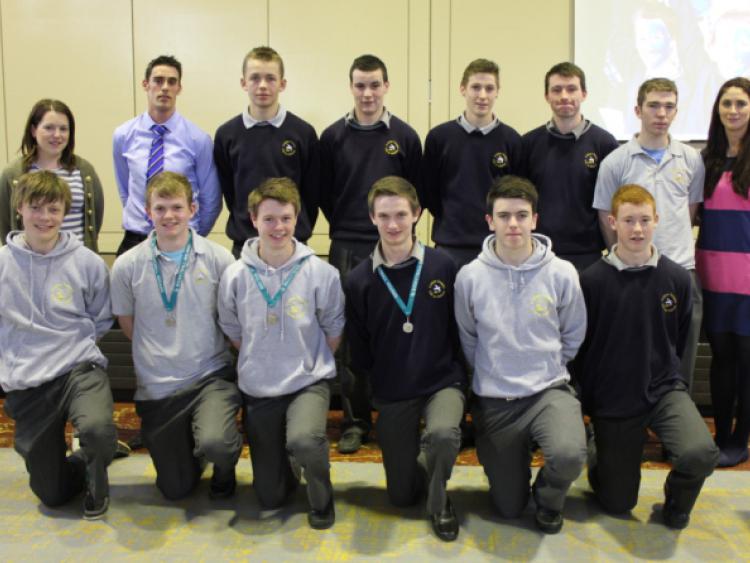 Colaiste Iosagain, Portarlington had its most successful year ever in the sporting field, bringing home many medals and trophies.

Colaiste Iosagain, Portarlington had its most successful year ever in the sporting field, bringing home many medals and trophies.

Pride of place must go to the first year basketball team who won the All-Ireland final recently against Loreto, Navan.

The second years won bronze medals in the All-Ireland series. Awards were presented by teacher and Clare All-Star hurler, Brendan Bugler. Boys Basketball is also riding on the crest of a wave. The teams competed in the ‘A’ grade this year at both U-16 and U-19 level and both teams finished runners up in their competitions .

The Equestrian team continues to increase in numbers and has many successful outings in charity rides and hunts. Athletics in the school is also bringing home lots of medals. The first year athletics team of Eva Galvin, Naoimi Lutrell, Shauna Fenlon and Jessica Higgins came fifth in Belfast in the All-Ireland Cross Country having previously won bronze in Leinster.

Many students won gold medals in the County Cross Country event in Killenard. Seodhna Hoey’s outstanding form of late saw her win gold and silver in the discus and hammer throw at the Leinster Track and Field Championships. Seodhna now goes on to represent the school at the All-Ireland Finals at Tullamore.

To complete the students impressive sporting year in a highly enjoyable fashion they put a stop to the teachers run of five in a row victories in the annual charity Teachers Vs Pupils basketball game.