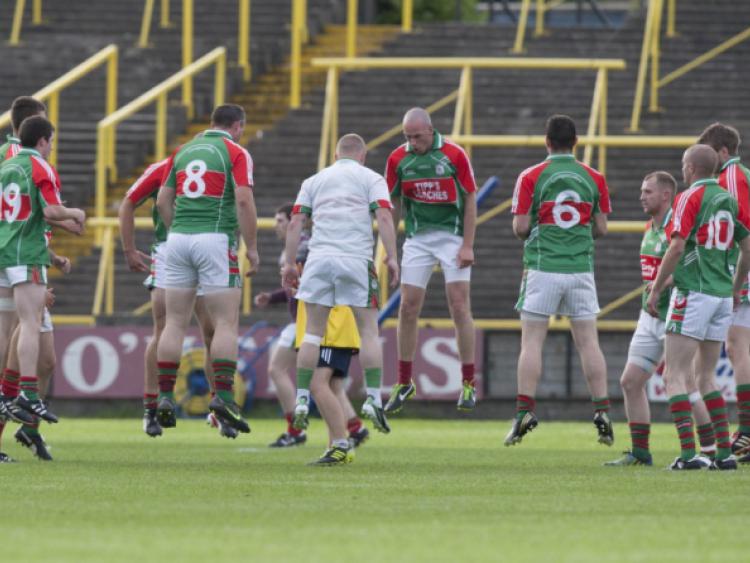 For 30 minutes of this game, newly crowned Division 1 League Champions Graiguecullen played with a pace, precision and directness that Portarlington simply couldn’t match.

For 30 minutes of this game, newly crowned Division 1 League Champions Graiguecullen played with a pace, precision and directness that Portarlington simply couldn’t match.

By half-time they had built a 2-8 to 0-3 lead and their supporters in O’Moore Park on a sunny Saturday evening would have fully expected their side to push on in the second-half and hammer home their advantage.

The expected onslaught did not materialise as they only added a further 1-1 after the break with the goal coming very late in the game from centre-back Mark Timmons. Despite the deficit, Portarlington upped their game after the restart but perhaps because they had built such a big advantage by half-time, Graiguecullen never played with the same desire and intensity after the break that they had in the opening half.

They were never in any danger of being overhauled by Portarlington but against stronger opposition they will be punished if they switch off as they did last Saturday evening. In saying that if they play to the same standard they did in for the first-half for an entire game, they will be a very difficult side to stop and, based on their performance in the first 30 minutes, they have emerged as arguably the most impressive team and the side most likely to unseat Portlaoise from their throne.

Portarlington opened the scoring through Eoin Gleeson in the first minute but by the time they would score again, Graiguecullen had 1-6 on the board with four coming inside the first six minutes.

Barry Brennan slotted over the first point from a free and it was followed soon after by a second point from impressive centre-forward Danny Alsybury. Graiguecullen were moving the ball at an incredible pace and Portarlington were left chasing shadows as Barry Brennan and Ian Fleming added points from frees.

With ten minutes on the clock, Graiguecullen struck for their first goal after the Portarlington defence was opened up with remarkable ease. A well placed ball put wing-back Daniel O’Reilly in behind the Portarlington defence. He shot for goal from a narrow angle but the ball was well saved by Gary Lanigan. Unfortunately for the ‘keeper, the Port defence was slow in getting back to cover and O’Reilly had all the time in the world to slot the rebound to the back of the net.

Further points followed from Mark Timmons and Shane O’Neill to leave eight points between the sides with just 14 minutes gone.

Portarlington briefly stopped the rot with points from Cathal Ryan and Graham Weldon but in the final ten minutes of the half, Graiguecullen added another 1-2 to extend their lead to an impressive 11 points. The points came from Barry Brennan and Mark Doogue with the goal after 20 minutes coming after the move of the half. Barry Brennan, Mark Doogue and Ambrose Doran all combined to open up the Portarlington defence with Brennan eventually finding the space to shoot past Gary Lanigan.

Incredibly after their near perfect first-half, Graiguecullen took 23 minutes to add to their total in the second-half as Portarlington upped their game and added some respectability to the scoreline.

Christopher Booth and Jonathon Fulham added points early in the half but from the 37th to the 50th minute neither side worried the scorers as the pace of the game dropped to pedestrian.

Portarlington thought they had a goal on 50 minutes but the whistle just went for a free before Cathal Ryan’s shot found the back of the net. Daryl Foy slotted over the resulting free to leave Graiguecullen 2-8 to 0-6 ahead.

Eventually Ian Fleming ended Graiguecullen’s drought with a point from a free but Portarlington responded with three of their own to get back within six points with time running out. In the closing seconds however Graiguecullen emphatically sealed the win when Mark Timmons came up from the back and cut through the Portarlington defence before dispatching the ball to the back of the net.