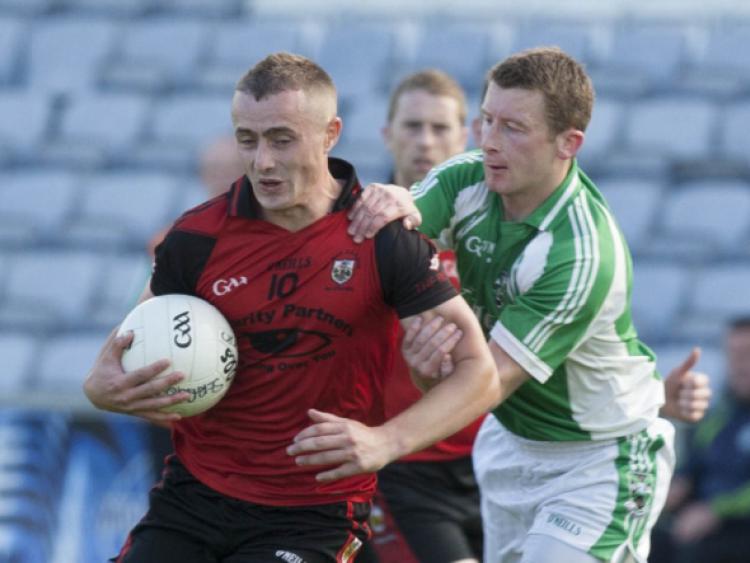 At the third time of asking and with the last kick of the game, Colm Kelly snatched a draw for Stradbally against The Rock forcing a replay which will take place next Friday night in O’Moore Park.

At the third time of asking and with the last kick of the game, Colm Kelly snatched a draw for Stradbally against The Rock forcing a replay which will take place next Friday night in O’Moore Park.

Kelly had two previous chances in injury-time to force a draw but on each occasion he was wide of the target. Luckily for Kelly and Stradbally, the ensuing kick-out from Terence Conlon went straight to Cormac Delaney. Delaney was fouled as he moved forward and Kelly put his previous misses behind him to slot over the equaliser from 30 metres out.

It was harsh on The Rock who had come back from two points down with nine minutes to go to lead by one entering injury-time thanks largely to a superb display from Shane O’Connell. They had been rank outsiders coming into the game given that they finished second from bottom of Division 2 in the league while Stradbally had finished second in Division 1.

However on the night that gulf between the sides in terms of league positions was not evident on the pitch and The Rock can count themselves unlucky that they were not in the hat for the second round draw. Stradbally did hit the butt of Terence Conlon’s left hand post twice in the second-half but when the final whistle went they were still fortunate not to be facing the battle to come through the losers section.

At the end of an instantly forgettable and very poor quality first-half, the sides were level on three points apiece. The opening half was only noteworthy for the plethora of misplaced passes and poor shooting..

Ciaran Carroll opened the scoring for The Rock with a free after three minutes but that was cancelled out three minutes later by Tom Shiels who slotted over a left footed free for Stradbally.

Nine minutes passed before the next score when Padraig Langton curled the ball over to put Stradbally in front. After 15 minutes without a score, The Rock then hit two in three minutes from Stephen McDonald and a free from Ciaran Carroll as they retook the lead.

With both sides kicking wides, dropping shots short and gifting possession to the opposition, the game never took on any real pattern but The Rock almost got in for a goal three minutes before the break but Ivan Lawlor’s close range shot was blocked by Colin Beale.

One of the very few moments of incisive attacking play in the first-half came just before the interval when Padraig Langton went on a scything run through The Rock defence before slotting the ball over the bar.

Thankfully for the supporters of both sides, the pace and quality of the game improved significantly in the second-half building to the drama of the last second equaliser.

Colin Beale and David Murphy exchanged early points before Stradbally seemed to be pulling clear with three consecutive points from Colm Kelly (2) and Cormac Delaney. The Rock however showed great resilience and points from David Murphy and Shane O’Connell got them back within one.

Colm Kelly and Shane O’Connell exchanged points before a spectacular score from John Donoghue for Stradbally off the outside of his right foot from 30 metres left two between the sides with ten minutes to go.

The Rock, belying their poor league form, lifted their game again and scores from Ivan Lawlor, Shane O’Connell and Philip Peake edged them in front.

Colin Beale hit the post for Stradbally with Terence Conlon beaten which left The Rock one ahead deep into injury-time.

When Colm Kelly struck a free wide and then kicked another to the left of the posts from play, it looked as if The Rock would hold on for the win but after a poor kick out, Kelly was given one more chance to snatch the draw when Cormac Delaney was fouled and he obliged as he calmly slotted the ball between the posts.