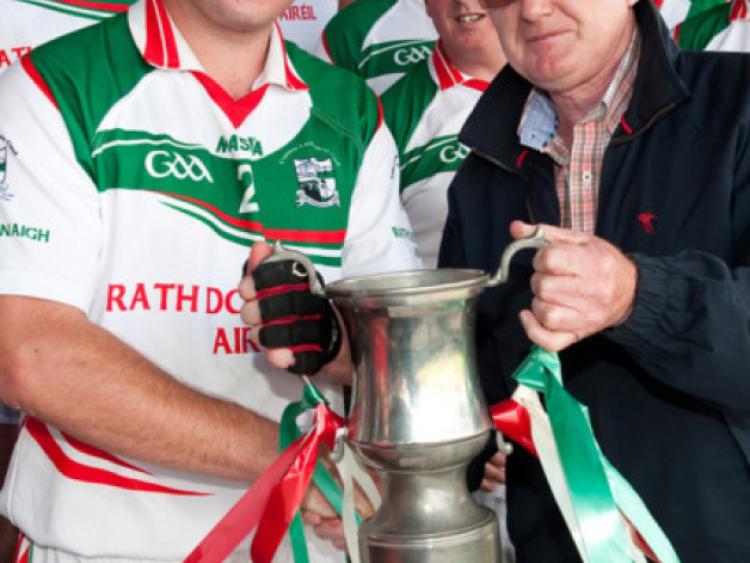 An excellent second-half performance saw Rathdowney/Errill come back from three points down at the interval to claim the Junior C Hurling Championship title with seven points to spare in O’Moore Park on Saturday afternoon.

An excellent second-half performance saw Rathdowney/Errill come back from three points down at the interval to claim the Junior C Hurling Championship title with seven points to spare in O’Moore Park on Saturday afternoon.

A goal from Anthony Costigan just 16 seconds after the restart was the crucial score as it swung the momentum in Rathdowney/Errill’s favour and a second goal from Shane Madden midway through the half put the game beyond Rosenallis who only added four points in the second-half with two of those coming in the last two minutes.

They had a number of goal chances however in the second-half but Rathdowney/Errill goalkeeper Jack Daly kept them at bay on three occasions while the woodwork also denied Joseph Keatingwith 15 minutes remaining.

Rosenallis had the better of the opening 30 minutes and they should have had more than 1-6 on the board when the half-time whistle went. They had seven wides to go with their seven scores in the period while Rathdowney/Errill were far more accurate scoring six of their eight chances.

Rathdowney/Errill were quicker out of the blocks in and a brace from Peter Grey gave them the early lead. After a number of wides, Rosenallis opened their account after five minutes through Joseph Keating but it took another five minutes and three more wides before Declan Conroy levelled the scores.

Rathdowney/Errill pulled away again with points from Barry Bowe and Anthony Costigan but Rosenallis blasted into the lead midway through the half thanks to a fine individual goal from Joseph Keating and a point from a free from the deadly accurate Colm Walsh.

Rathdowney/Errill pulled one back through Anthony Costigan but the next three all came for Rosenallis as they opened up a 1-6 to 0-5 lead with Patrick J Fitzpatrick and Colm Walsh (2) finding the target. They had chances to extend their lead further but Rathdowney/Errill pegged one back before the break through the ever dependable Peter Grey.

Rathdowney/Errill had struggled in the first-half but whatever was said in the dressing room at the break certainly inspired a renewed effort and they back on level terms within 16 seconds of the throw-in. A long ball in fell kindly to the unmarked Anthony Costigan and he kept his composure to drill the ball to the back of the net past the isolated Paul Friel.

Before a minute had passed on the clock in the second-half, Rathdowney/Errill were back in front with Shane Madden lofting the ball over. Barry Bowe added another a minute later and a three point deficit had swiftly been turned into a two point lead.

Rosenallis were struggling to adjust to the renewed impetus of Rathdowney/Errill and their only response came from a Colm Walsh free five minutes into the half.

That score did little to stem the tide as Damian Madden, Shane Madden and Peter Grey all added points for Rathdowney/Errill to leave the score at 1-11 to 1-7 ten minutes into the seocnd-half.

Rosenallis also got back into the game but a shot from Joseph Keating was saved by Jack Daly and the follow up from Colm Walsh went wide of the posts.

There was no such wastefulness at the other end as less than a minute later, Shane Madden found himself one-on-one with Paul Friel and while the Rosenallis ‘keeper did brilliantly to get a hurl on the powerful shot, he couldn’t stop it from crossing the line. A point from Peter Grey left eight points between the sides and while Rosenallis added three points late in the game, two from Colm Walsh and one from Dean Mahon, Rathdowney/Errill countered with two of their own from Damian Madden and Peter Grey to seal it.

There was also time for a fine double save from Jack Daly before the final whistle as Rathdowney/Errill comfortably held on for the win.