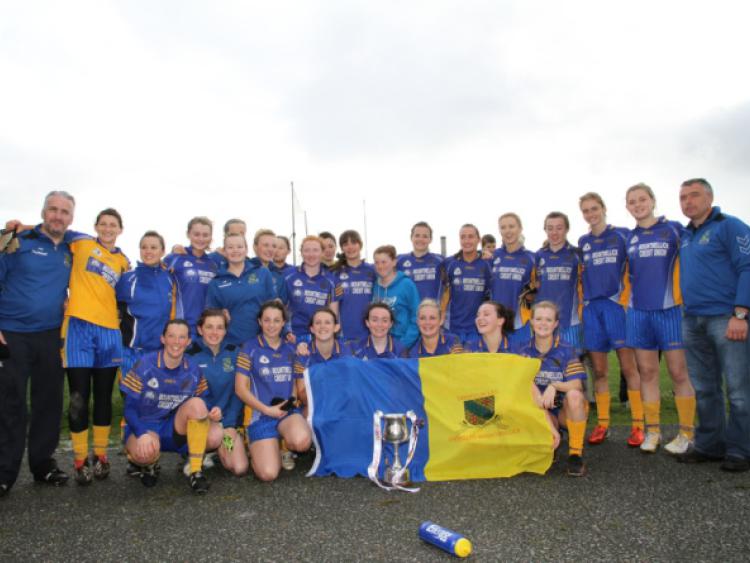 Five goals, four in the opening thirty minutes left Seneschalstown seeing stars early on. It was the Laois champions who opened the days scoring with Laura Marie Maher pointing after five minutes of action. Maher was the star of the show finishing the game with 3-3 as Sarsfields marched to the Leinster title.

Fiona Mahon soon restored parity with a free moments after Maher’s opener. A further Sarsfields point from the boot of Tracey Lawlor edged her side back into a narrow lead as the Laois side began to get the measure of their experienced Meath opponents.

Pushing forward Meaghan Dunne had the white flag waving before in the eleventh minute Sarsfields struck for their first goal. A ball over the top of the hapless Philomena Sheridan found Claire Conlon. Conlon offloaded to the unmarked Dunne, Dunne who no mistake as she dispatched past Lisa Mullen in the Seneschalstown’s goal.

A second free from Mahon kept the Seneschalstown account ticking over, but it was not enough to upset the rhythm of Sarsfields.

After Seneschalstown’s foray into the Sarsfields territory, the Laois side hit back in style at the other end. A long ball allowed Conlon to beat the challenge of Philomena Sheridan to win possession. Sheridan fouled Conlon as she headed for goal andeferee Des McEnery hadn’t any other choice but to award the penalty. Up stepped Conlon to finish the job and net past Mullen for Sarsfields’ second goal of the day.

As well as conceding the penalty, Seneschalstown found themselves down to fourteen players after Sheridan saw yellow for her challenge. Despite losing their full-back Seneschalstown pushed forward in a bid to stop the rot pointing through Lizzy Doran and Stephanie Byrne which left five between the sides as the game neared half-time

Just as the game entered the final two minutes of the opening half Louise Marie Maher pushed forward to net Sarsfields’ third goal. On the stroke of thirty minutes, a third free from Mahon reduced the gap but Sarsfields were not finsihed as Mahon netted a fourth goal to stun the Meath champions.

Two quick fire points from Lawlor, one from a free and one from play, left Seneschalstown with a lot to ponder as the entered the break, trailing by twelve.

On the restart it was the Meath champions who played as if they had a point to prove. Restored to a full compliment, corner-forward Mahon was to the forefront of their fight back. Pointing twice in quick secession, both from frees, the deficit was down to ten.

Refusing to let go of their dreams of a Leinster title, Seneschalstown fought to claw back the lead Sarsfields had built during the opening half. Points from Louise McKeever, and yet another two from Mahon had seven between the sides.

A point from the boot of Maher kick opened Sarsfields second half account, before Doran restored the seven point gap.

The sides again swapped scores through Lawlor and Mahon before Maher hit her third goal of the day, with sixty-two minutes on the clock, to ensure victory for Sarsfields. Still fighting, Mahon pointed late into injury time to round off an impressive personal tally of nine points. Unfortunately for her this was not enough to stop the force that is Sarsfields who will now march on into an All-Ireland semi-final.