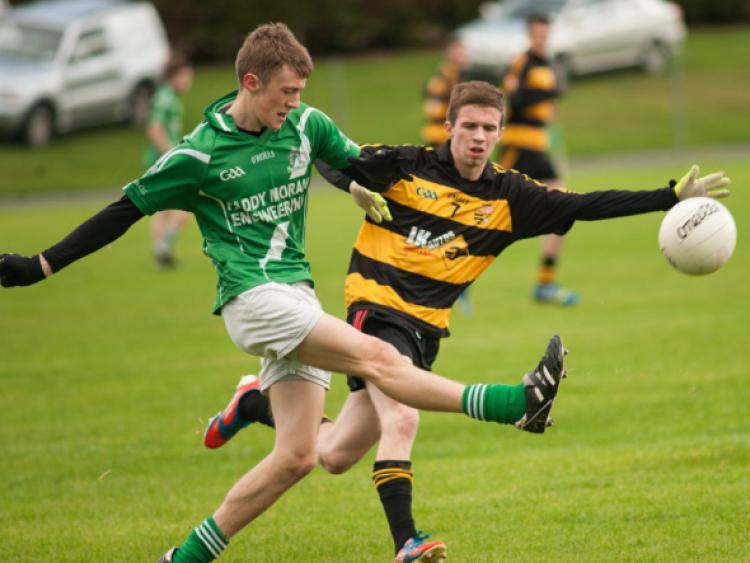 A bitterly close encounter played out in Stradbally on Sunday morning saw Crettyard-Killeshin emerge with a win following a hard-fought game against The Heath.

A bitterly close encounter played out in Stradbally on Sunday morning saw Crettyard-Killeshin emerge with a win following a hard-fought game against The Heath.

Crettyard-Killeshin started the game well and found themselves three points ahead inside the opening ten minutes thanks to points from Mark Lyons, Cormac Murphy and Ronan Phelan too them take an early lead.

The Heath registered their first point shortly after from an Evin Keane free, but Crettyard-Killeshin restored their three point lead through Eoin Lowry soon after - but this was to be Crettyard-Killeshin’s last point of the half as The Heath capitalised on their growing wind advantage.

With things starting to fall in their favour, The Heath quickly notched points through Andrew Booth, Stephen Rainsford and Evin Keane to level the proceedings with five minutes left to play in the half.

The Heath looked to make full use of the wind while they still had it, and closed out the half in style with Mark Dowling firing a brace, while Evin Keane and Robbie Dowling both raised the white flag to see The Heath hold a deserved four point lead at the break.

With fifteen minutes left on the clock, Evin Keane fired another brace for his side - but his efforts were once again annulled by Crettyard-Killeshin’s Stephen Attride and Ronan Phelan.

With ten minutes left to play, it looked as though The Heath may have pulled away once gain thanks to three consecutive points from man-of-the-match, Evin Keane, to leave all to play for in the final minutes.

What was ultimately the game changing score came next. With eight minutes left on the clock, Eoin Lowry claimed what was the only goal of the game with a measured effort into the corner of the net.

Crettyard-Killeshin closed out the game with Evan O’Carroll hitting a brace, while points from Cormac Murphy and Stephen Attride sealed a four point victory to seem them progress.