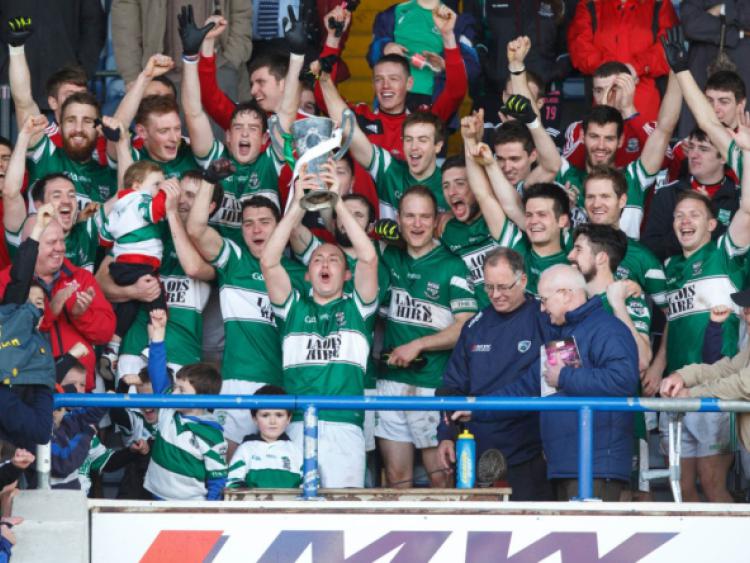 The records just keep getting broken. And Portlaoise just keep winning. The kingpins of Laois football show no signs of getting dethroned, as they secured an incredible seventh Laois SFC title in a row, and 30th in total, after ahard fought three point win over Arles-Killeen.

The records just keep getting broken. And Portlaoise just keep winning. The kingpins of Laois football show no signs of getting dethroned, as they secured an incredible seventh Laois SFC title in a row, and 30th in total, after ahard fought three point win over Arles-Killeen.

And it really was hard fought too, probably the toughest of the seven finals they have played on their current record breaking run.

Arles-Killeen scored more against them than any other side had managed in those seven finals too, and they were four ahead in the early stages of the second half before Portlaoise made their comeback.

The champions needed a little luck too, with Kevin Fitzpatrick’s game-changing goal in the second half only coming about because of a deflected shot from Brian McCormack.

There was much to be happy about if you were an Arles-Killeen supporter, but they just ran out of steam in the second half. After scoring 1-6 in the first half, they only added two more points after half time, and for that Portlaoise deserve a lot of credit.

Having been dominated at midfield for the entire first half and over run in their defence for much of that time too, they made the changes they needed to make at half time and they eventually turned the game in their favour.

They almost got off to the ideal start too, when Paul Cahillane set Craig Rogers up for a goal with a little over a minute gone, but his shot was well saved by Mick Leigh. We didn’t have to wait long for the first score, however, with Paul Cahillane pointing in the fourth minute.

Killeen’s response was swift, with Donie Brennan pointing a free, and the teams traded another point piece to leave them level at 0-2 each after the opening ten minutes.

Arles-Killeen took the lead for the first time after that, with Brennan notching up his second free, but the Portlaoise response was quick and clinical. A misplaced pass in the Arles-Killeen defence allowed Portlaoise to break through on goal, and the move ended with Brian Smith hauled down in the penalty area by Mick Leigh.

After a delay for an injury, Craig Rogers stood up to take the spot kick and slotted it into the bottom left corner.

Most teams have crumbled in the aftermath of a Portlaoise goal, but Arles-Killeen’s response was very impressive, with Paul Kingston taking control of the game for the remainder of the half. He started by pointing a free, before scoring a fantastic goal.

He won possession on the right wing, before breezing past Brian Mulligan and shooting low past Michael Nolan. He was in on goal again moments later only for Nolan to deflect the ball out for a 45. Donie Brennan picked out Donie Kingston from the 45, and he popped the ball over the bar to open up a three point lead.

Portlaoise were really under the cosh now, with Donie Kingston bossing the midfield battle and Paul Kingston causing havoc in attack. Craig Rogers gave them a brief respite with a pointed free, but Paul Kingston landed a long-range free to leave Killeen three ahead at the break.

Things got even better for them at the start of the second half, when Brian McDonald squeezed over a shot from the left wing to push them four ahead, but they would not score again for 26 minutes.

Portlaoise didn’t exactly come roaring back into the game, however, it wasn’t until the eighth minute of the half that they got their next score, with Craig Rogers pointing a free. He followed that up with a score from play, and the score that swung the game arrived next.

Brian McCormack lined up a shot for a point from 35 yards which was partially blocked. Kevin Fitzpatrick, in as a sub just minutes earlier, was standing eight yards out and the ball dropped perfectly for him, and he fisted it beyond Mick Leigh to give Portlaoise a lead they would not relinquish.

With Zach Tuohy introduced moments later, the momentum was shifting in Portlaoise’s favour, and that was driven home soon after when Brian McCormack nailed two long range frees to leave a goal in it.

When things are going your way the shots all seem to find the target, and when Craig Rogers long range effort found the target there was only going to be one winner.

Killeen did manage one more point in reply, from a Donie Kingston free, but there would be no dramatic finale, with Portlaoise getting the only late goal chance, but Zach Tuohy’s shot went wide, although it mattered little.