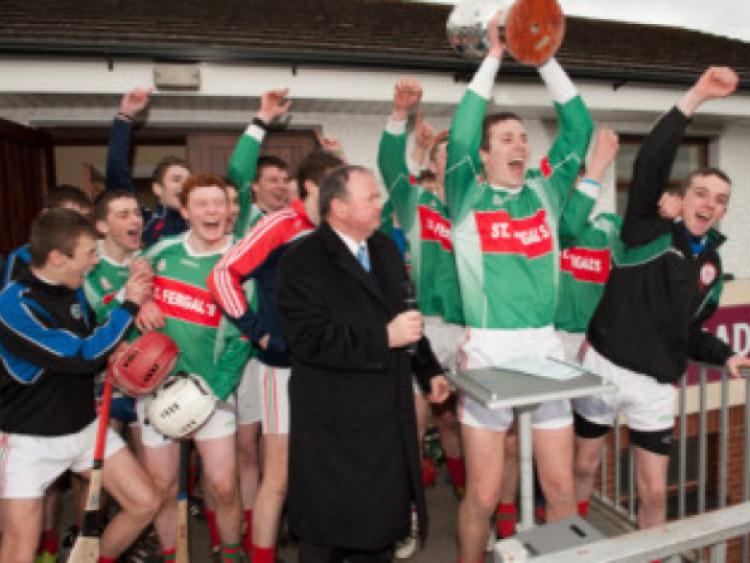 In what was a tit for tat game in Newbridge on Saturday afternoon, it was St Fergal’s second half display which saw them take home the title to add to a bulging trophy cabinet.

In what was a tit for tat game in Newbridge on Saturday afternoon, it was St Fergal’s second half display which saw them take home the title to add to a bulging trophy cabinet.

Scoil Aodhain were full value for their first half three point lead, but a much improved performance in the second period which yielded two goals meant it was the Laois side who deservedly prevailed.

Mark Kavanagh got Rathdowney off the mark within the first minute from the placed ball, but three points in a row from Scoil Aodhain’s Sean Gray, two frees and an excellently struck ‘65, gave the Dublin side an early 0-3 to 0-1 advantage.

Scoil Aodhain were making the most of the breeze and their superior physical presence in the final third, a Luke Kelly point giving them a 0-6 to 0-3 lead on the fifteen minute mark.

It took a number of good interceptions and clearances from St Fergal’s number three Gavin Dunne to ensure the game didn’t get out of reach for the Laois men during this period of Scoil Aodhain dominance.

The men in green and red slowly worked their way into the game, and half forward Aidan Corby was now beginning to cause more and more trouble for the Scoil Aodhain rear-guard. A well taken point from Kavanagh in the twenty fourth minute reduced the deficit to two with the scoreboard now reading 0-5 to 0-7.

Scoil Aodhain’s Robert Fox was a thorn in the Laois men’s side throughout the hour and his excellently taken 27th minute point from a tight angle out on the side line opened the gap to three. The side’s swapped points as the first half came to an end seeing Scoil Aodhain go to the break 0-9 to 0-6 to the good.

The inner sanctuary of a dressing room can be a mystical place and whatever was said to the Laois men at the break had the desired effect, as within four minutes of the restart St Fergal’s were level.

Scores from the increasingly influential Kavanagh and Corby tieing affairs at 0-10 a piece by the thirty fifth minute. The pace of scoring abated over the next ten minutes as the game became more attritional.

In tight games it often takes a moment of class to give one side the advantage and so it was to be on this occasion. A poor puck out was pounced on by St Fergal’s half forward Robbie Phelan who in turn found Stephen Bergin. Bergin showed beautiful footwork to evade his marker and made no mistake in the resulting one-on-one, crashing home under the body of Scoil Aodhain’s Michael Curley.

Mark Kavanagh added another free a minute later to further confirm the pendulum swing; the scoreboard now reading 1-13 to 0-11 on the forty five minute mark.

St Fergal’s midfielders Colm Stapleton and Eoin Fitzpatrick were beginning to overcome their opposition in the engine room. Scoil Aodhain refused to lie down and hit two points back-to-back to leave just a goal between the sides entering the final ten minutes.

The Laois men then struck for their second green flag with three minutes left. Again Phelan and Bergin combined, this time Bergin turning provided for Phelan who slid home from close range. This setback was still not enough to put the game to bed and a super double save from St Fergal’s net minder Danny Brennan a minute later was proof of this.

Scoil Aodhain did find the back of the net as the game entered injury time, Robert Fox somehow finding enough space to squeeze home. However, a final reassurance point from Kavanagh gave the Laois side the win on a final score line of 2-15 to 1-13, meaning the watching GAA president Liam O’Neill had the honour of presenting the trophy to the students from his home county.