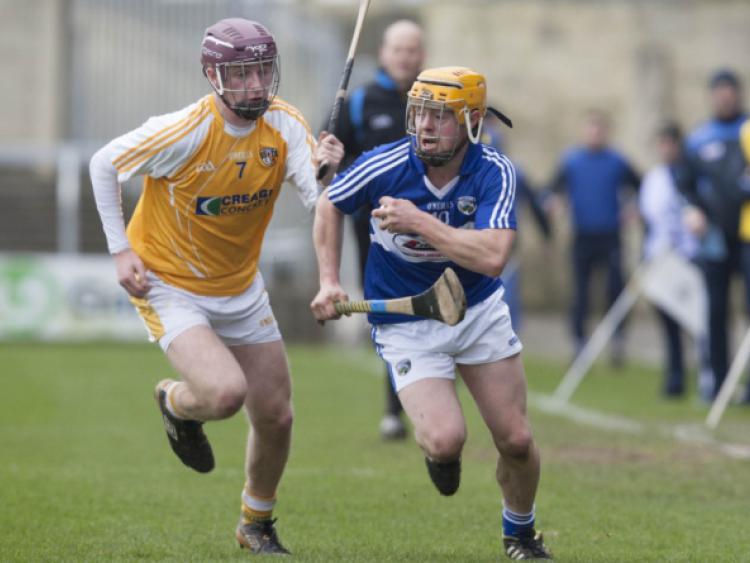 Laois senior hurlers took another step towards the quarter-finals of the National Hurling League after securing a six point win over Antrim on Sunday afternoon.

Laois senior hurlers took another step towards the quarter-finals of the National Hurling League after securing a six point win over Antrim on Sunday afternoon.

In a high-scoring affair, Laois almost threw away the two points here with a very poor 15 minute spell after half time. In that period they went from leading by five points to trailing by one, and Antrim looked poised to record an upset victory.

At that stage, Laois decided on a tactical reshuffle by withdrawing Dwane Palmer from his sweeper role and pushing his replacement, Neil Foyle, into the full-forward line.

It didn’t take long for it to pay dividends, as Laois hit the next two points before Foyle, with his first touch, swept the ball to the back of the net to set Laois on their way to victory.

By the time that scoring spree came to an end, Laois had hit 1-5 without reply to lead by seven points, and despite Antrim battling all the way to the end, a Ross King goal in the closing stages finally sealed the win for Laois.

It is now two wins in three games for Laois, with an away date against Wexford coming this weekend. There was plenty of good and bad from Laois here too, and there are a few things they will have to rectify for the Wexford game this week.

The backs were a little too casual at times, particularly in the second half when Antrim were coming on strong. Laois conceded 21 points, with one player, Conor Johnston, allowed to score 0-7 from play.

On the plus side, Laois scored 2-21 themselves, with ten different players scoring. A total of 2-15 came from play too, with the quality of some of the scores right out of the top drawer.

It hadn’t looked too promising in the opening minutes, as Antrim made light of playing into the breeze by scoring the first two points. Conor Johnston and Paul Shiels (free) provided too early scores, but Laois finally kicked into life when Ross King scored a lovely point from the right wing.

That score really settled Laois, and moments later his club mate John Purcell did likewise from the left wing. King then floated over a long-range free to put Laois in the lead. Conor Carson levelled the game once again, but Laois took control of proceedings after that.

Cha Dwyer started the run with an excellent long-range point before Ross King did equally well to score under huge pressure 40 yards out. A King free then had three in it, before Antrim finally hit back through Neil McManus, who surprisingly lined out at wing-back.

Laois were building some momentum, however, and they quickly stretched their lead. Tommy Fitzgerald hit three points, the second of which was destined for the top corner, only to be tipped over the bar. King added a free as Laois went six clear, with Conor Johnston offering some respite for Antrim with his second point.

There was no slowing Laois down, however, and Matthew Whelan (free) and Joe Fitzpatrick made it a seven point deficit, but a strong finish to the half from Antrim meant that there was just five in at the break, 0-13 to 0-8.

Antrim manager Kevin Ryan seemed to light a fire under his side at the interval, and they emerged a team transformed on the restart. Paul Shiels hit the first three points of the half to reduce the gap to just two points, as the Laois team were marked absent.

The only effort they had in that time was a poorly struck free from Matthew Whelan that came up short, and Antrim kept pressing on, hitting the next three points to lead by one after 48 minutes.

A Ross King free from the right wing finally settled Laois into the half, and Stephen Maher quickly added another. Seconds later, Conor Dunne launched a long ball in the direction of the Antrim penalty area, and it bounced up perfectly for Neil Foyle 12 yards out. He wasted no time, and with a quick flick of his wrists, he had the ball shooting past Chris O’Connell for a crucial score.

Willie Hyland, King (free) and John Purcell all added points as Laois went seven clear, and the game was theirs to lose at that stage.

Antrim, to their credit, never gave up, and they came back to score three points in a row as the game threatened to be blown wide open once again.

Luckily, Laois didn’t allow that to happen, as Ross King squeezed a shot past O’Connell’s near post to seal a crucial victory.