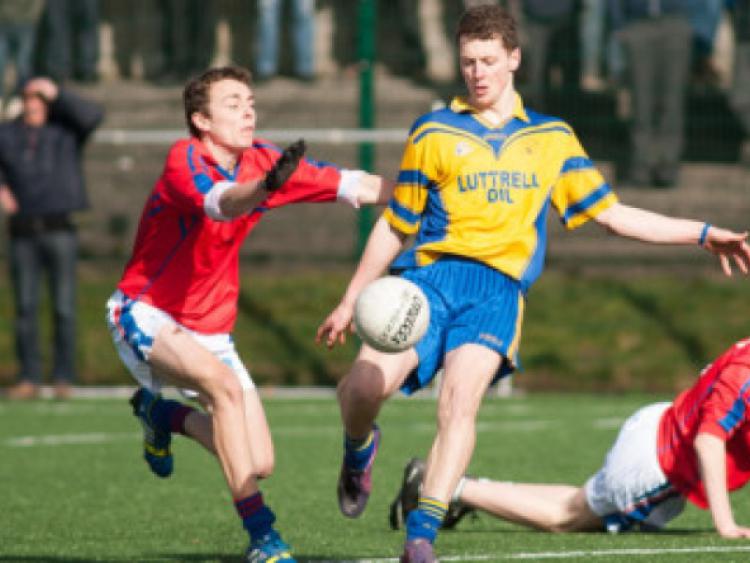 A phenomenal scoring run of 1-5 in nine minutes against the wind midway through the second-half turned the tide of this hugely entertaining derby hosted in St Loman’s in Mullingar last Thursday.

A phenomenal scoring run of 1-5 in nine minutes against the wind midway through the second-half turned the tide of this hugely entertaining derby hosted in St Loman’s in Mullingar last Thursday.

Four minutes into the second-half, the Portarlington school found themselves four points adrift but five quick fire points followed by a goal from the outstanding Colm Murphy turned the game in their favour.

In the first-half Iosagain struggled to come to terms with Colaiste Choilm’s tactics as the Tullamore side attacked from deep with their wing-backs playing a major role in the game.

After early points from Jake Foster and Graham Wheldon got Iosagain off to a good start with the wind, Colaiste Choilm hit back with 1-4 unanswered with the goal coming from captain Byrne who cut through the defence with ease.

Iosagain finished the half strongly with three of the last four points but they still trailed 1-5 to 0-5 at the break. They fell four behind early in the second-half to Shane Dolan’s fifth point but the Portarlington side adjusted their tactics in the second-half and dealt far better with Colaiste Choilm’s attacking threat.

At the other end their forwards lead by Colm Murphy got the scoreboard ticking over with points from Jake Foster and two each from Matthew Finlay and Jamie Connolly before Murphy went on a solo run through the defence and finished with aplomb past Joe Smyth.

The momentum swung back to Colaiste Choilm who hit the next four points to level proceedings. Iosagain had two golden chances to put daylight between the sides but Jamie Connolly blasted wide when clean through on goal while a thunderous shot from Matthew Finlay clattered off the crossbar.

Points from Jake Foster and Colm Murphy put two between them entering the last two minutes but substitute Ian Scully scored a spectacular point to get Colaiste Choilm back within one. Matthew Finlay notched his fourth point to leave two in it entering injury-time but Shane Dolan reduced it to one with his ninth point of the game.

The impressive full-forward had one late chance to draw the game with a free three minutes into the added time but his well struck effort from 50 metres drifted just to the left of the post sparking scenes of celebration from the Colaiste Iosagain players.