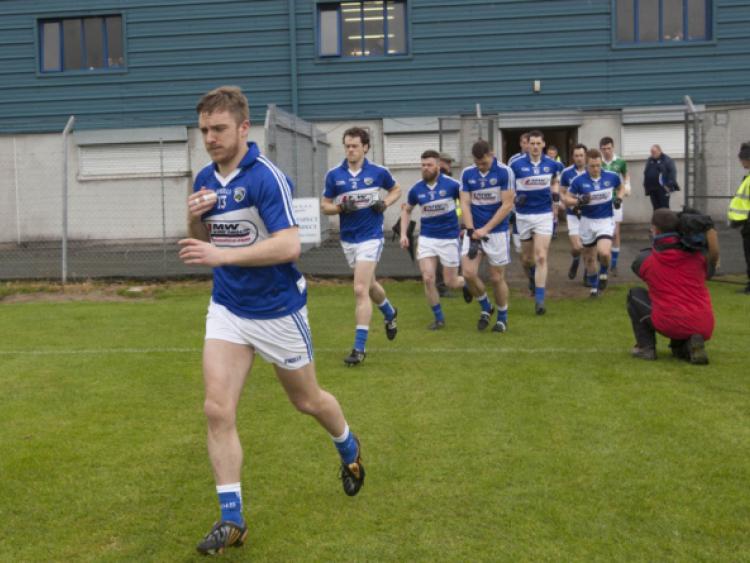 There was no repeat of the infamous 1986 ‘Battle of Aughrim’ in the Wickow venue on Sunday as Laois cruised to a seven point victory to set up a Croke Park showdown with Dublin in the quarter-final.

There was no repeat of the infamous 1986 ‘Battle of Aughrim’ in the Wickow venue on Sunday as Laois cruised to a seven point victory to set up a Croke Park showdown with Dublin in the quarter-final.

After a lacklustre first-half where a Wicklow goal levelled the scores just before the break, Laois upped their game in the second-half and eased away to record a comfortable win.

A run of six points unanswered in a seven minute spell early in the second-half for the visitors effectively settled the game and while Wicklow briefly threatened a revival, the result was never really in any doubt.

The start of the second-half was delayed by half an hour when a Laois supporter needed emergency medical treatment. Thankfully the necessary medical equipment and expertise was on hand and the man was eventually transported to hospital.

Wicklow breifly got their noses in front on the restart but once Laois hit their stride, the home side were opened up and the home supporters were streaming for the exits to avoid the perennial bottle neck in Aughrim long before the final whistle.

Laois captain Ross Munnelly was the undoubted star of the show and he led the way with nine points in the wet and miserable conditions. Donie Kingston with six points and John O’Loughlin with three also brought their shooting boots although it is a concern that only two forwards got their names on the score-sheet. The accuracy in front of goals was patchy in the opening 35 minutes and in the closing minutes but a haul of 21 points in wet conditions was certainly impressive.

Without Mark Timmons, Denis Booth and Paul Begley, Laois fielded an untested back-line including debutantes Stephen Attride and Robbie Kehoe but for the majority of the game they were more than a match for Wicklow opponents. Both Attride and Kehoe slotted in seamlessly and showed that when called upon, they are up to the challenge at this level.

Far tougher tests lie ahead however for the newcomers and the experienced players alike. There is no question that the performance level will have to be cranked up several notches to trouble Dublin but on Sunday Laois did what was required and in the second-half in particular, they did so with an encouraging confidence and swagger.

Kevin Meaney opened the scoring for Laois in the first minute but in a scrappy opening phase of the game, the advantage wasn’t doubled until the 10th minute when Ross Munnelly slotted over a long range free.

Laois were struggling to find an attacking rhythm with Wicklow defending in numbers and the home side took advantage knocking over next four points through Seanie Furlong (2), Rory Finn and Leighton Glynn.

After 12 minutes without a score, Laois eventually found their range with captain Munnelly curling over a fine point from the left wing. Only a brave, last ditch block from Padraig McMahon denied Leighton Glynn a goal with 23 minutes on the clock and Laois took advantage of the let off scoring the next three points to move two ahead.

A free from Seanie Furlong reduced the deficit to the minimum but Laois responded again with Donie Kingston and John O’Loughlin finding the target. Those scores looked set to give Laois a three point cushion at the break but in the final minute of the half, Paul Cunningham pounced on a lose ball in the Laois defence and made no mistake with his finish past Graham Brody.

After the half hour delay to allow medical attention for a Laois supporter, it was Wicklow who hit the ground running with the first two points of the half.

However Laois eventually settled back into the game and when they did so, they found an attacking intensity and a cutting edge that had eluded them in the first 35 minutes.

Points from Darren Strong and John O’Loughlin drew them level and while Wicklow did get back in front once more on 44 minutes, the momentum was firmly with Laois.

Three outstanding scores in a row, one from John O’Loughlin and two from Ross Munnelly, got Laois on the front foot and three points on the bounce from Donie Kingston put daylight between the sides for the first time.

Wicklow briefly threatened a revival with three of the next four points but they were held scoreless for the closing 12 minutes as Laois slotted over four more, three from Munnelly and one from Kingston, to wrap up a comfortable win.