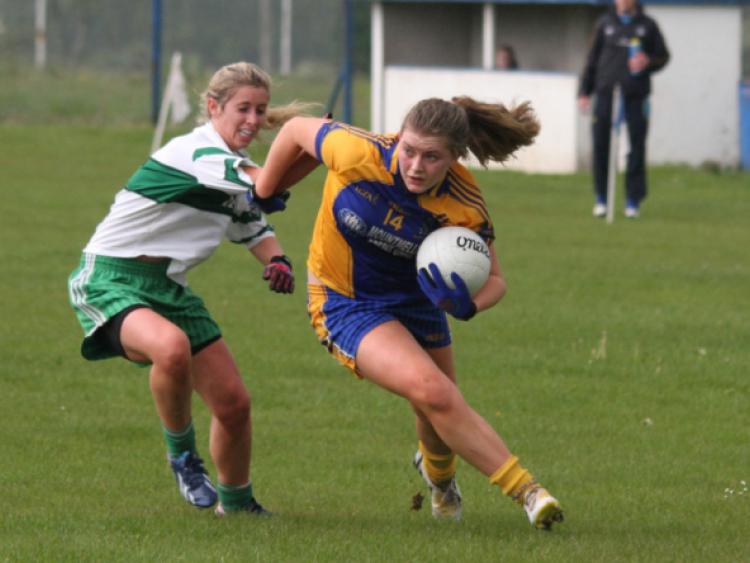 Sarsfields and St Brigid’s recorded impressive wins in Round 2 of the Laois Ladies Senior Football Championship over the weekend.

Sarsfields and St Brigid’s recorded impressive wins in Round 2 of the Laois Ladies Senior Football Championship over the weekend.

Sarsfields, as was generally anticipated, defeated Portlaoise in Mountmellick on Sunday evening by 2-14 to 0-3. The result indicates an emphatic win but it does not do justice to the valiant efforts of a gutsy Portlaoise outfit throughout the game. The win guarantees the 2014 champions a semi-final spot but they were made dot fight every inch of the way before finally clinching another nailing down the prize.

Portlaoise led by Clodagh Brennan, Ellen Healy and Aisling O’Gorman defended tenaciously throughout but the incessant attacks of the Blues slowly but surely kept the scoreboard ticking over.

By half time Sarsfields, with Tracey Lawlor again back to her brilliant best, had eased into a comfortable 1-9 to 0-1 lead with Rosemarie Bermingham, Lorna O’Sullivan and Ciara Burke also finding the target. Aisling Kehoe registered Portlaoise’s first half point.

In the second half,Portlaoise again defended well but lived off scraps in the middle of the field where Joyce Dunne and Olwyn Farrell ruled the roost. Behind them Mags McEvoy, Ashling Dunphy, Jenny McEvoy and Amy Grehan cut off all threats to Ciara O’Loughlin’s goal.

For Portlaoise Ciara Delaney, Fiona Dooley, Alison Taylor and Aisling Kehoe never gave up the fight and made sure that Sarsfields earned their semi-final slot.

On Friday evening Shanahoe hosted St Brigid’s in another crucial Laois Senior Ladies Championship game but failed the match the visitors skill, commitment and scoring ability with St Brigid’s winning by 4-15 to 0-8. The early exchanges were fairly even but slowly St Brigids found their rhythm and with goals from Chloe Ryan and Alice Malone moved into a 3-6 to 0-5 half time lead.

The visitors confirmed their superiority in the second half and were content to pick off points to run out comfortable winners.