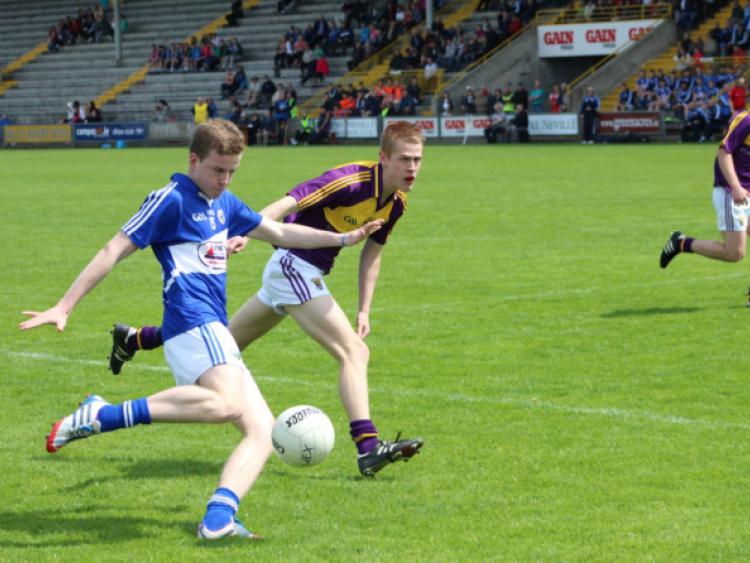 Laois minor footballers survived a late onslaught from Wexford to seal their place in the semi-finals of the Leinster MFC on Saturday.

Laois minor footballers survived a late onslaught from Wexford to seal their place in the semi-finals of the Leinster MFC on Saturday.

It was a game which quite literally went down to the last kick of the game, as Wexford had a shot for goal right at the death which failed to find the target, and final whistle sounded seconds later.

Laois can now look forward to a semi-final date with Kildare in early July when the Leaving Cert is done and dusted. They will have work to do ahead of that game, but they can take a lot of encouragement from their performance here.

They played in fits and starts, but any time they needed to get a score or make a block or an interception, someone always stepped up to the plate.

Things could have been different had Wexford not missed a handful of late frees, but Laois always looked capable of working a score, so either way they may not have made a difference.

With a strong wind blowing down towards the town end of the ground, both teams struggled playing both with it and against it. Laois had to face into it for the first half, but they looked by far the better team in the opening stages.

Tom Shiel pointed a free in the third minute as he had a hand in most of Laois’ good play early on. It was good work from the Stradbally man down the right wing that set up Aaron Dowling for Laois’ second point moments later.

It took Wexford until the eight minute to open their account, but once they got going they were back level quickly. It was a brace of frees that got them back into it, as Tony Smith and Tom Byrne both found the target.

Laois were unfazed by the Wexford comeback, however, and a neat one-two passing move between Tom Shiel and Brian Daly resulted in Shiel popping over a point, and Laois struck for their first goal moments later. A fine team move saw the ball worked to Colm Murphy 14 yards out, and his shot flew into the top corner.

Shiel added a free soon after and Laois suddenly found themselves five points to the good, but they failed to score in the last 12 minutes of the half. Wexford, meanwhile, had their most productive spell of the game.

Starting with a point from centre-forward Ian Carty, they rattled off four scores without reply to cut Laois’ lead to the minimum as they teams headed for the dressing room, 1-4 to 0-6.

With wind advantage in the second half, Laois would have been hoping to kick on and put the game beyond Wexford, but it didn’t happen like that.

They didn’t get their first score until David Aston floated over a 45, but Ian Byrne responded for Wexford to leave one point still in it after 10 minutes of the second half.

The next score was going to be crucial, and lucky for Laois it would be a decisive strike for them. Again Tom Shiel was involved, as he set up Aaron Dowling in the penalty area, and he twisted and got a low shot away which found the back of the net.

Shiel then added a free a minute later and Laois were five ahead again and all looked set for a comfortable finish to the game.

There would be no such luck for Laois, however, as Wexford responded with a superb goal themselves with 13 minutes to go, as Shane Doyle hammered a shot into the top corner from distance.

Remarkably, there would not be another score until injury time, as Wexford started to dominate the game but kept missing scoring chances, including four frees.

Laois held their nerve, and despite the onslaught, did enough to claim the win.