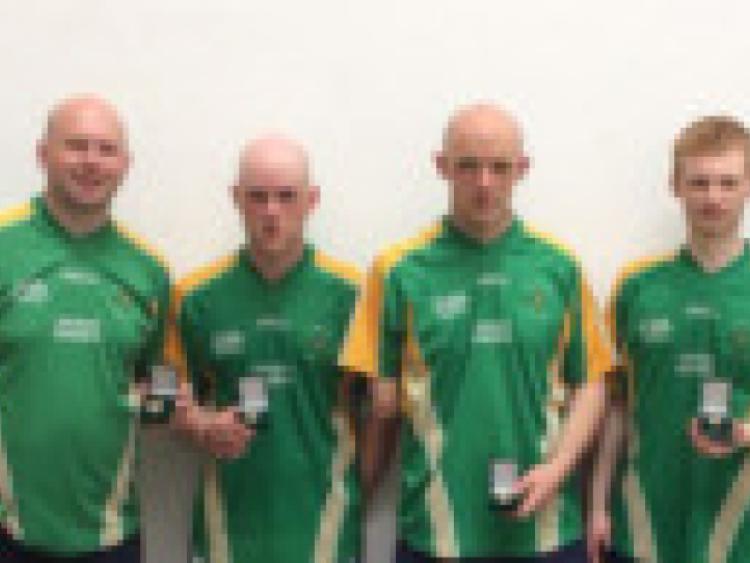 St Brigid’s, Monavea are celebrating their first ever All-Ireland 60x30 Club title after a hugely impressive performance against a very strong Broadford team from Limerick in an exciting final that was played in Na Fianna, Dublin.

St Brigid’s, Monavea are celebrating their first ever All-Ireland 60x30 Club title after a hugely impressive performance against a very strong Broadford team from Limerick in an exciting final that was played in Na Fianna, Dublin.

Both clubs went into the All Ireland Junior B Club Final untested after recording comfortable victories in their semi-final encounters. Monavea were never troubled in their game against St Patrick’s of Cavan registering a 126-25 success while Broadford had too much firepower for Collooney of Silgo winning out 86-56.

First into action for Monavea in the final was Michael Donovan who faced a formidable opponent in Shane Murphy. The Limerick man was dominant in the early exchanges and went on to win the first game 21-10. With Monavea trailing by 11 aces, Donovan knew he had to up his game and he responded accordingly going on to win the second game 21-15 and reduce the Broadford lead to a mere five aces.

In the doubles, Ray Fogarty and Andrew Dowling gave a masterful display against Dominic Enright and Eoin Hegarty. The Limerick men found themselves outclassed by the skill and power of their Laois counterparts who went on the register a comfortable 21-3 21-3 victory. This gave Monavea a commanding 31 ace lead going into the last singles.

Despite their dominant position, Tómas Lennon knew he couldn’t show any complacency in his singles encounter with the highly talented Ben Walsh. Walsh battled bravely and reduced the arrears by nine aces when winning the first game 21-12. Broadford were now trailing by 22 aces and with only a maximum of 21 aces left on offer, their chances of All-Ireland glory had been extinguished. Lennon put the icing on the cake for the Laois side by winning the last game 21-9 and leave Monavea as worthy All-Ireland Junior B 60x30 Club champions on a scoreline of 106-75.

This was a fantastic achievement for the Laois club considering the fact that there is no 60x30 alley in the county and the players had to commit to travelling outside of the county to train.

Laois will be hopeful of further provincial and All-Ireland glory with Niamh Dunne through to the Ladies Leinster Junior B Final where she faces Aisling Maher of Kilkenny and Tómas Lennon through to the Mens Leinster Junior B Final where he faces Miley Connors of Wexford. Both players also remain in the doubles competition with their respective playing partners Ciara Dowling and Ray Fogarty.