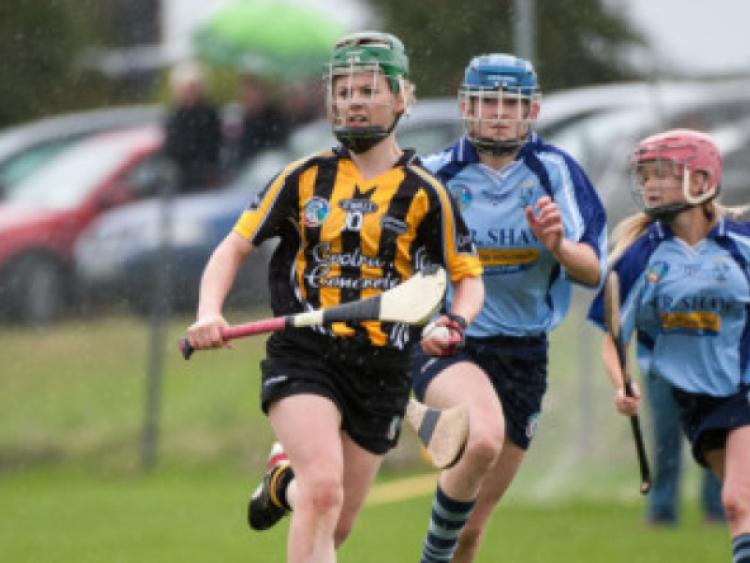 Camross overcame O’Moore’s in the Laois Senior Camogie Final on Sunday but the defending champions were made to battle all the way to the bitter end in wet and windy conditions in Colt GAA Club.

Camross overcame O’Moore’s in the Laois Senior Camogie Final on Sunday but the defending champions were made to battle all the way to the bitter end in wet and windy conditions in Colt GAA Club.

Camross led by a point at the break thanks to a goal from Lizzy Ryan late in a first-half where O’Moore’s had the upper hand in terms of territory and possession.

However after scoring just three times in the opening 30 minutes, Camross gradually took control of proceedings on the resumption, particularly around the middle third of the field where O’Moore’s had held sway in the opening half.

Despite their dominance, Camross only led by one entering the final six minutes but a goal from Dawn Mortimer late in the piece eventually swung the game in their favour.

O’Moore’s never threw in the towel but over the hour, they didn’t manage to score from play with all ten of their points coming from placed balls from Laura Marie Maher. They had a number of other chances including three clear sights of goal in the first ten minutes but after Catriona Downey shot wide from close range, Laura Marie Maher was denied by a super double save from Jennifer Moore.

In contrast, Camross found the back of the net three times and were far less wasteful when they got a sight of goal.

The intensity throughout the game from both sides never relented with the player in possession being closed down quickly from start to finish. The hooking and blocking was of the highest standard and no quarter was asked, and certainly none was given, from the throw in to the final whistle.

Niamh Dollard opened the scoring for Camross with a free but O’Moore’s were quickly in front thanks to two pointed frees from Laura Marie Maher. With seven minutes on the clock, Camross jumped into the lead when a poorly struck free from Niamh Dollard somehow found its way through a crowd of players before rolling into the back of the net.

That would prove to be Camross’ last score for 20 minutes however as O’Moore’s took the upper hand in the game. They should have responded to Camross’ goal with one of their own but they missed some golden opportunities. Catriona Downey shot wide when she was clean through on goal before Laura Marie Maher was denied twice in quick succession by Jennifer Moore. Her first powerful shot hit the net minder in the chest but the ball came back in her direction. However just as Maher was set to strike, Moore rushed from her line and managed to get a deflection on the shot to put it out for a ‘45.

Maher slotted over the ‘45 and she added three more points, two from frees and another from a ‘45 in the half to put her side in front.

Late in the half however, Camross snatched back the lead when Lizzy Ryan reacted quickest to tap home from close range after Michelle Holmes’ initial shot was saved by Casey Conroy.

That left Camross 2-1 to 0-6 ahead at the break with the rain beginning to get heavier. The sides matched each other score for score early in the second-half with a brace of frees from Laura Marie Maher being cancelled out by points from Sarah Anne Fitzgerald and Therese Keenan.

Camross began to pull away with points from Niamh Dollard and Keenan again but Laura Marie Maher kept O’Moore’s within two with her ninth point. The game turned between the 54th and the 56th minute with Camross hitting 1-2 to make the decisive break. After a point from Niamh Dollard, Dawn Mortimer struck for the decisive goal after being put through by substitute Shona Carroll.

Carroll added a point herself soon after and while Laura Marie Maher brought her total to ten points in the closing minutes, it was only a consolation score as Camross held on.