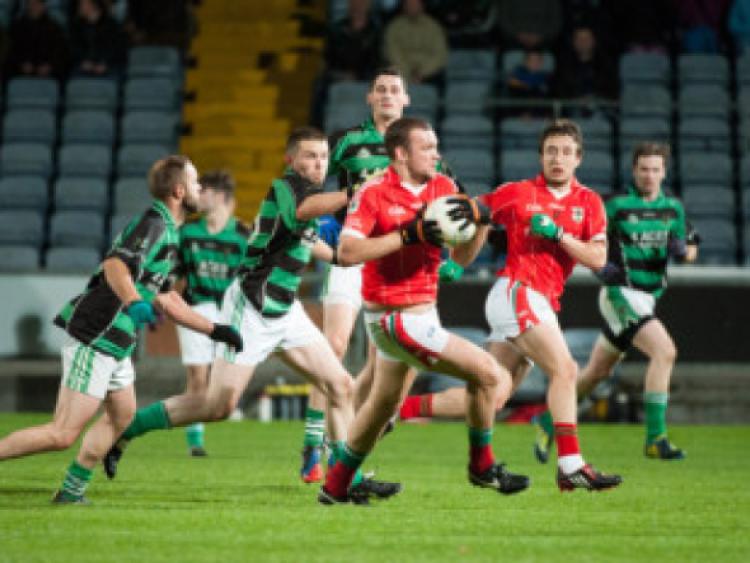 James Moore’s dramatic fifty-eight minute winning point steered Ballyfin over the line as they emerged one point victors over a battling Clonaslee, St Manman’s in O’Moore Park on Saturday night to set up a county final showdown against Timahoe.

James Moore’s dramatic fifty-eight minute winning point steered Ballyfin over the line as they emerged one point victors over a battling Clonaslee, St Manman’s in O’Moore Park on Saturday night to set up a county final showdown against Timahoe.

With just a minute on the scoreboard, Clonaslee, St Manman’s captain, Glen McEvoy, gave his side an early lead with the opening score of the day from a free. Two minutes later, the Ballyfin side of the scoreboard was up and running thanks to wing-back, Darragh Connolly’s, on-target effort to level the proceedings.

Clonaslee edged themselves back into the lead through John Rigney’s point after four minutes, before Rigney added his second two minutes later to see his side lead three points to one after just six minutes in an entertaining fixture. Ballyfin set about dismantling the Clonaslee lead with Sean Moore’s first of the day, before James Finn levelled the game once again as they game reached the quarter of an hour mark.

With 17 minutes on the clock, Clonaslee struck for the opening goal of the day. In a move that was equal to Ger Dunne’s finish, the build up play between John Rigney, Willie Young and Dunne to set up the chance itself was first-class before Dunne ever put the ball in the back of the Ballyfin net as they went a goal ahead.

Ballyfin closed out the final 13 minutes with points from Sean Moore, James Moore and Eoin Dunphy, while Clonaslee ensured they held a narrow one point lead at half time on a scoreline of 1-4 to 0-6, thanks to Ger Reilly’s twenty-eighth minute strike between the posts.

Ballyfin started the second half with three points in the opening eight minutes to see them take the lead for the first time in the game. James Finn restarted the scoring with his second of the day, before Jason Horan and James Moore both added points to see their side take a two point advantage early in the second half.

In typical fashion, St Manman’s claimed their second goal of the day when they needed it. With 40 minutes on the clock, Glen McEvoy travelled 40 metres up the right touchline before cutting inside and unleashing a ripper of a shot that beat Paul Holohan in the Ballyfin goals, as well as a defender on the line, to edge them into a one point lead.

Ballyfin levelled the game four minutes later through Eoin Dunphy’s second of the night, before they retook the lead a minute later through Sean Moore’s clinical third point from play to set up a nervy final 15 minutes.

Clonaslee almost made it a hat-trick of goals for the day when Diarmuid Conroy rifled the ball across Ballyfin goalkeeper, Paul Holohan, only for Holohan to pull off a fantastic save and turn it away from danger.

With seven minutes left on the clock, Clonaslee set the scene for nail-biting finale when substitute John Rowney split the posts from distance to level the scores yet again. As both sides went looking for what they knew could be the winning point, referee Joe Brennan awarded Ballyfin a free thirty-five metres out shooting into the Town end.

As he had done all day, former Laois Minor and U-21, James Moore, stepped up to the mark with two minutes of normal time left to play and calmly threaded the ball between the posts for what was ultimately the game winning point.

With time essentially up, the game descended into a large scuffle and following a four minute clash, Joe Brennan gave Tommy Tynan and Conor McEvoy their marching orders before calling it a day and sounding the final whistle, and with it a one-point win for Ballyfin.