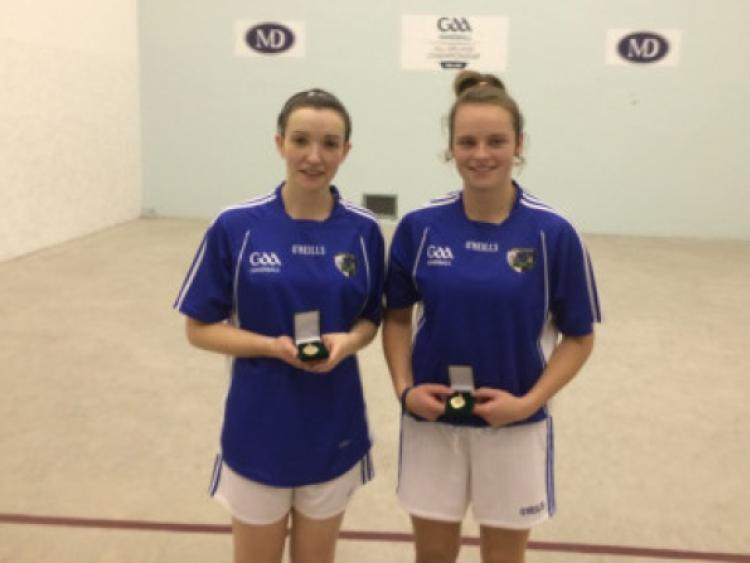 Having won the Ladies Junior B singles final the previous week, Niamh Dunne went into the game determined to add another title to her collection.

Niamh and Ciara started the first game in blistering fashion, dominating the early exchanges. They soon built up a sizeable lead thanks mainly to their impressive serving and ability to kill the ball when the chances presented themselves. Their opponents were visibly struggling and despite their best efforts were unable to stage a fightback going down 21-13 in the first game.

The Galway girls were to make a fantastic start to the second game surging to a commanding 12-2 lead. The Laois paring thankfully showed great resilience to reduce the deficits through the impressive serving of Ciara Dowling. Incredibly, from being 10 aces in arrears the Laois girls found themselves leading 19-12 and on the cusp of All-Ireland success.

Connaughton and Finnegan refused to give up however and quickly closed the gap to a mere two aces. With the score now standing at 19-17 the Laois girls were to show all their experience to force an error from their Galway counterparts and regain their serve. They then added another score through an excellent Niamh Dunne serve that left them one ace from victory.

The next rally of the game seemed to last an eternity before the sublime Ciara Dowling closed out the victory with a breathtaking kill shot to the bottom corner of the wall.

This was to spark scenes of jubilation in the packed gallery as the travelling Laois support celebrated a historic success for Laois handball. In capturing the Ladies Junior B 60x30 doubles title it completed a clean sweep of the 60x30 titles at this grade for Laois.