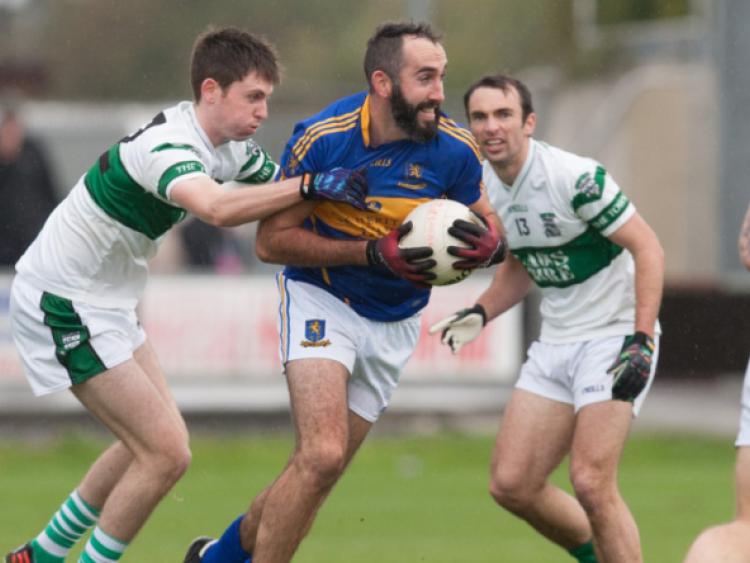 Portlaoise manager Tommy Conroy admitted he was just happy to see his side qualify for another final after a tough encounter with O’Dempsey’s on Sunday.

Portlaoise manager Tommy Conroy admitted he was just happy to see his side qualify for another final after a tough encounter with O’Dempsey’s on Sunday.

Portlaoise trailed for large spells of the game, and it took a fortuitous goal ten minutes from time to swing the game back in their favour.

Looking back on the game afterwards, the Portlaoise boss was grateful to come through a game here his side looked a little off form. “It was very tough, O’Dempsey’s really put it up to us, and I suppose it was a lucky goal that got us going.

“We were struggling for a bit of form, struggling to put moves together and finish the few moves we did have. They looked very lively and they had their match-ups done well, and in fairness it’s probably themselves and Port and (Arles) Killeen, the three of them are really hunting us down at the moment.”

While O’Dempsey’s did get their match ups right, and made life difficult for Portlaoise, the reigning champions seemed to be struggling regardless. They haven’t hit the heights of previous seasons, and Conroy confessed afterwards that he’s not sure where the spark will come from for his side. “We’re sort of waiting ourselves for the spark, I don’t know where the spark is going to come from.

“Maybe it’s a question of them being around for a long time and it’s harder to get yourself going, I don’t think there are any easy answers to these things. You look back and you ask questions and you have meetings about it, but really, maybe it is a case of them being there for so long that they are at a level and they can play at a certain level and get by, but as I said to them beforehand, one day that catches you out because you run out of time or the game runs away from you, so you have to try to do it each time.”

Next up now is a re-match with Arles-Killeen, and Conroy is expecting another tough outing. “It’s going to be a real battle again. What Killeen have compared to Portarlington and O’Dempsey’s is they have the experience now, they have that built up and they are not going to be fazed in any way by a final.

“And compared to Portarlington and O’Dempsey’s, who are younger teams, a lot of their better players are in defence, whereas Killeen have players right up through the middle, they have an excellent midfield and two or three really good forwards, so it’s going to be a huge battle, and if we can get over the line by a point, we’ll be happy with that.

“I think sometimes people are expecting us to win by ten points, but those days are gone, teams have closed the gap on us and really it’s up to us to try to push on.”

With Zach Tuohy now expected to be missing for the final as he returns to Australia, Conroy revealed there are efforts being made to keep him around. “We’re talking with out sponsor at the moment” said Conroy after the game.