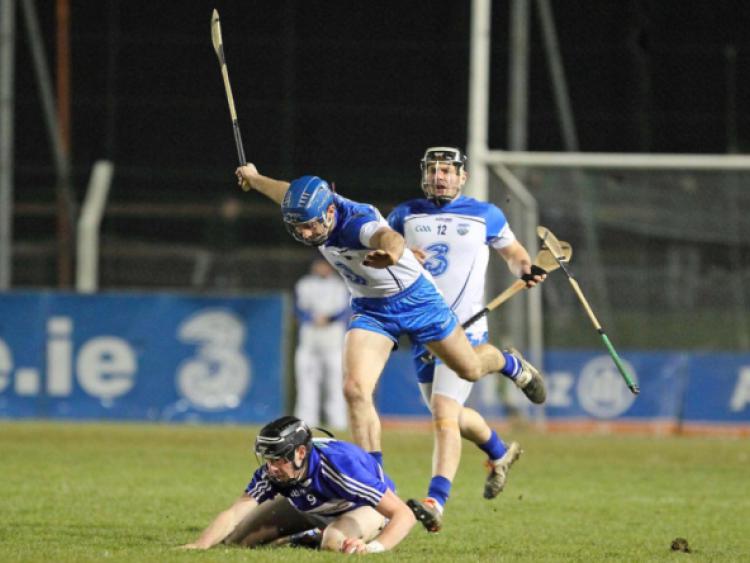 Laois slumped to an 18 point defeat against Waterford on Saturday night in Dungarvan, as their NHL Division 1B campaign took another blow.

Laois slumped to an 18 point defeat against Waterford on Saturday night in Dungarvan, as their NHL Division 1B campaign took another blow.

After the opening round loss to Offaly, this game was much more disappointing, as it was far too reminiscent of the really bad days of not so long ago.

When Cha Dwyer was issued his second yellow card 14 minutes into the second half, it was only a matter of how much Waterford would win by. They could even afford the luxury of withdrawing top scorer Pauric Mahony before the end, as he became the second player in a week to score 1-14 against Laois.

The dismissal of Dwyer sealed Laois’ fate, although it looked incredibly harsh on the Ballinakill man. He had been warned in the first half after his first yellow card, but it seemed referee Diarmuid Kirwan was just waiting for him to commit another foul before sending him on his way.

It is the third time this year Laois have had a player sent off, and while they are not a dirty team by any means, they are giving away a lot of frees and getting themselves into unneccesary trouble.

Saturday night also saw them struggle to win primary possession on puckouts, with a worrying amount of them uncontested. Their first touch is another cause for concern, and while the pitch in Fraher Field was probably better suited to football, the Waterford team handled it just fine.

On the basis of the two games so far there is a worry that Laois have gone backwards from last year, and the results would point to that. It is still very early in the year, and a lot of Laois’ problems can be worked on, but for their own sake they will have to see performances pick up soon.

Defeats like this one on Saturday night do nothing for a team trying to build momentum, and the next game against Antrim grows in importance. The aim at the start of the year was no doubt to make the knockout stages of the league once again, and if Laois are to do that then they have to win against Antrim on March 8.

That’s not going to be easy but they will have work their way out of this down period.

Cheddar Plunkett and his management team opted to go back to playing an extra defender in this game, with Picky Maher operating in that role from the outset.

Laois registered the first score of the game through a Zane Keenan free, but it was quickly wiped out by Pauric Mahony’s first effort of the day from the left wing. Mahony (free) and Willie Hyland exchanged points, with Hyland’s effort awarded after the umpires weren’t fooled by Stephen O’Keeffe’s attempts to keep it from going over the bar.

Brian O’Halloran edged Waterford back in front, but Ross King replied for Laois as that set the tone for most of the half. The teams were level on six occasions in that first half, with Zane Keenan and Pauric Mahony providing most of the scores from placed balls.

Waterford managed to take control of the game late in the half, however, as two points from Austin Gleeson and one from Mahony sent them to the dressing rooms leading 0-11 to 0-8.

Laois started the second half brightly with a free from Zane Keenan to cut the deficit to just two points, but that was as good as it got for Cheddar Plunkett and his team.

Pauric Mahony hit back with three points in a row before the game was all but ended as a contest when Cha Dwyer was given a second yellow card in the 49th minutes.

Waterford, like all good teams when presented with an extra man, completely controlled the game from that point on.

Mahony pointed from the left wing before the score of the game arrived midway through the half. A long ball forward from Kevin Moran was superbly caught by Stephen Bennett, and he made space on the edge of the penalty area to rifle a shot into the top left corner of the net.

Two more goals arrived courtesy of Mahony and Thomas Connors, whose shot deflected off Cahir Healy’s hurl to give Enda Rowand no chance in the Laois goal.

Zane Keenan hit three points from frees late on but it only served to at least get into double figures on the night. There is much to work on for Laois over the next two weeks, not least settling on a preferred style of play, having used two different systems in the two games so far.

It’s not nice to think any game at this time of year is a ‘must win’, but it looks that way with Antrim on March 8.