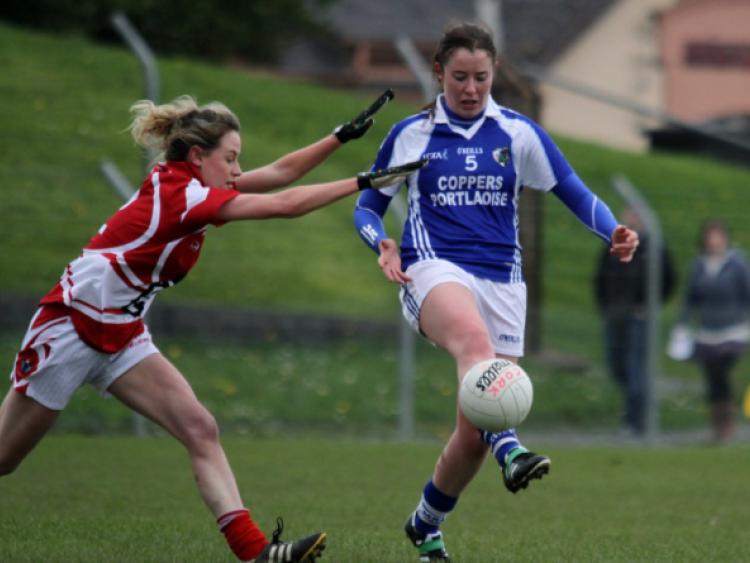 LAOIS failed in their bid to reach a second Tesco Homegrown Ladies National Football League final in three seasons as they were outclassed by a Valerie Mulcahy-inspired Cork in last Sunday’s semi-final at Sean Treacy Park in Tipperary town.

LAOIS failed in their bid to reach a second Tesco Homegrown Ladies National Football League final in three seasons as they were outclassed by a Valerie Mulcahy-inspired Cork in last Sunday’s semi-final at Sean Treacy Park in Tipperary town.

Tom McKittrick’s Laois had beaten the All-Ireland champions in the group stages of the competition but with a final place on offer for the winners, Cork turned on the style to claim a comfortable ten-point win.

The damage was done in the first half as Cork, despite playing against the wind from the start, led by 3-5 to 0-4 at half-time – with Mulcahy bagging 3-2 of that first half tally.

Laois, who registered 12 wides in total, managed just one point from play in that opening half – scored by Tracey Lawlor.

Laois were much better after half-time as they drew the second half with Eamonn Ryan’s powerful Leesiders.

17-year-old Ciara Burke, forging quite a reputation for herself, notched two second half goals for the O’Moore County, whose thoughts now turn towards the championship and a Leinster semi-final against Meath or Westmeath on June 30.

In a repeat of the 2011 Division 1 final, it was Laois who got off to the better start with the aid of the breeze.

They led by 0-2 to 0-1 as Lawlor popped over two early scores, including a tenth-minute point from play, but they wouldn’t score again for 14 minutes as Cork gained control.

Cork lost the services of Annie Walsh in the fifth minute as the midfielder was sin-binned for a high challenge on Martina Dunne.

Walsh was involved in an incident with Sarah Quigley in the very first minute as the Timahoe midfielder required treatment for three minutes.

And when play resumed, Walsh picked up a yellow card from referee PJ Rabbitte for her challenge on Dunne.

But Laois could not capitalise on their numerical advantage and Cork led by 1-1 to 0-2 when Walsh, who scored two points in the second half, resumed play.

Cork’s opening goal was scored by prolific corner forward Mulcahy midway through the first half.

Angela Walsh, renowned as a defender but operating in attack, set up the Allstar attacker for a clinical finish.

Mulcahy struck again soon after to knock the stuffing out of Laois and the writing was on the wall for McKittrick’s side at that stage.

Mulcahy’s attempted point struck Ciamh Dollard’s right hand upright and it was the Cork forward who reacted quickest to fire the rebound into the net.

With Laois rocked back on their heels, Cork took advantage as points from Emma Farmer and Orlagh Farmer opened up a seven-point lead – 2-3 to 0-2.

Mary Kirwan’s free in the 24th minute was the first Laois score for 14 minutes of play and even though Kirwan knocked over another free in the first minute of stoppage time, there was still enough time left in the first half for Mulcahy to wreak even more havoc.

She completed her hat-trick in the fourth additional minute, before converting a free to leave the Rebelettes in control at the midway point.

But instead of folding completely, Laois came out fighting after half-time and Burke netted within 17 seconds of the restart.

Seven points down, that was as good as it got for the O’Moore County but to lose by ten was an achievement in itself as Cork led by 14 points twice in the second half.