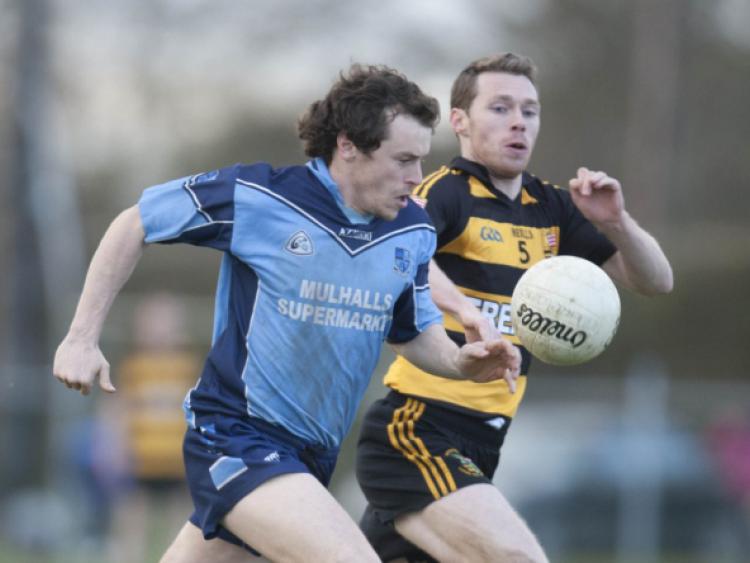 A superb point from MJ Tierney four minutes into injury time salvaged a draw for Ballyroan Abbey in this entertaining ACFL Division 1 clash with The Heath on Saturday night.

A superb point from MJ Tierney four minutes into injury time salvaged a draw for Ballyroan Abbey in this entertaining ACFL Division 1 clash with The Heath on Saturday night.

Down by four points heading into injury time, Ballyroan Abbey looked set to suffer their second defeat of the campaign to a Heath side looking to rebound after a heavy defeat to Emo. With the game in the balance, it was Ballyroan’s county players who had the final say as Padraig McMahon scored a scorcher of a goal before Tierney’s point at the death shared the spoils.

Ballyroan Abbey had gotten off to a great start, as two points from Padraig McMahon in the opening three minutes put them in control. The Heath took their time to settle, but were quickly back on level terms thanks to two pointed frees from Laois minor footballer Robbie Dowling, before Denis Booth then put them ahead after a burst up from centre-back.

Scott Conroy then hit a brace of pointed frees to put the hosts back in front, but Kieran Hyland then struck for The Heath’s first goal to put them back in front. Ballyroan Abbey then went on a run of three unanswered points to go back in front, but again The Heath came back, with Brian Ging’s goal putting them four ahead three minutes before half time.

In a half that had ebbed flowed, it was only right there would be late drama, as Eoin Kearns came up from centre-back to shoot low past Shane Booth, to leave it 2-5 to 1-7 at the half

The Heath started the second half much the stronger, as points from Dowling, Aidan Bergin and Bob Delaney restored their four point lead. Scott Conroy again responded for Ballyroan Abbey, but another two points from The Heath had them five up with 15 minutes to go. They would score just one more point before the end though, from John Booth, as Ballyroan edged their way back into it.

Two minutes into injury time, Padraig McMahon curled home a superb goal off the outside of his left foot from 25 yards out to get them within one.

It was left to Tierney then, and despite only being introduced in the 58th minute, he composed himself to point from out on the left wing to leave the teams level at the final whistle.

See this week’s Leinster Express for a full round up of all the weekend’s Division 1 Football League action plus a report on St Joseph’s and Emo.