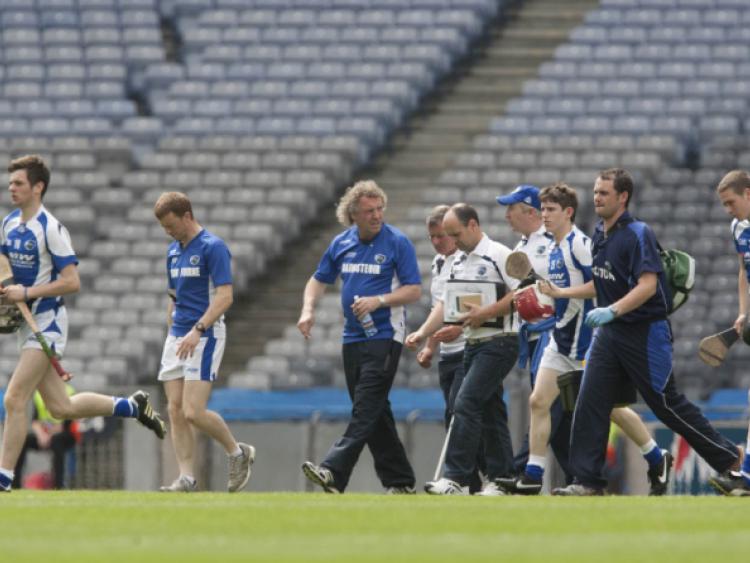 Laois minor hurling manager Pat Critchley has urged his side to regroup and quickly turn their focus to the All-Ireland quarter-final they have in three weeks time against Galway.

Laois minor hurling manager Pat Critchley has urged his side to regroup and quickly turn their focus to the All-Ireland quarter-final they have in three weeks time against Galway.

Speaking after the game, Critchley said that despite the disappointment, Laois would have to take advantage of their first appearance in the All-Ireland series in 50 years. “We just said to the lads, there are six teams left in Ireland at the moment, and there is still six teams after that game.

“It’s all to play for still, it’s the first time in 50 years that we have been in the All-Ireland championship and we’re still in it after today, so we’ve got to really try and get a big performance the next day and then get back up here for the semi-final.”

While the focus invariably has to turn to the future on days like this, Critchley admitted that his team had never played to their potential in the final. “We never really got a foothold in the game at all, Kilkenny were excellent again and we were on the back foot the whole day.

“The game passed us by like it did in Nowlan Park, but they are still the same group of lads that stepped off the bus here this morning, and they have responded well when they were in this position to get back into the frame, and we don’t have to win three games this time, we have to win one game in three weeks time.

“We’ll settle down now and reorganise again, and I know these boys will respond strongly. If we win one game, we’re into an All-Ireland semi-final and back here again, and when you come up here you want to come back again and do better the next day.

“They are still a great bunch of lads, and I know they will respond strongly to that defeat today, and there will be better days in Croke Park for us, and maybe in three weeks time we’ll have one of them.”

The team looked to be really overawed by the occasion, the opposition and the setting as well. All the preparation beforehand had been to try and ready the side for what they would experience, and despite everyone’s best efforts, they didn’t handle the day as well as they could have. “You prepare well, the lads prepare well, you think everything is ship-shape before throw in, but we just didn’t hurl up to the mark, and we weren’t intensive enough either. The game passed us by for the most part.

“They were physically strong, but we weren’t creating the same platform at the other end.

“Some times we panicked on the ball, sending it in to their ‘keeper rather than just being a bit more composed on the ball, which we usually would, so maybe in that sense it was the occasion that they were doing things they wouldn’t normally do, and you get days like that.”

It will take the players a few days to overcome the disappointment of the defeat, but they cannot dwell too long, as they are due to meet Galway in the quarter-final on July 27 or 28.