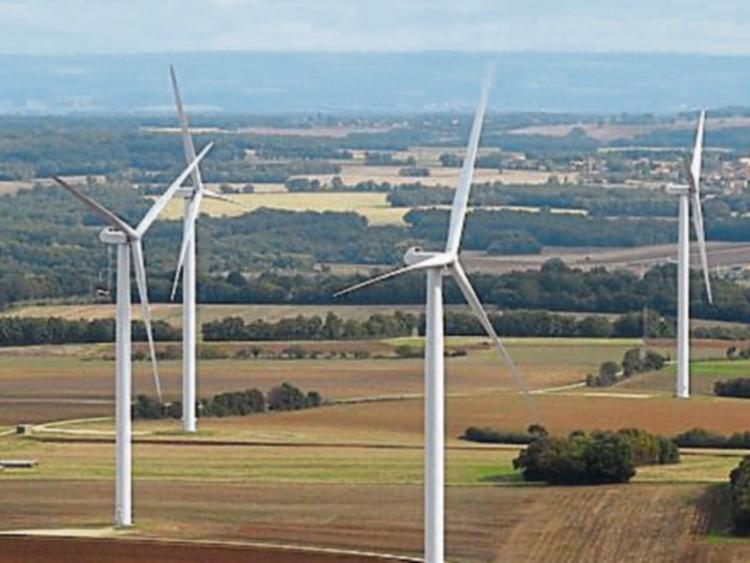 Tensions over wind turbines and power pylons boiled up at an IFA-run general election public meeting last week where Minister Charlie Flanagan said he could have sued campaigners .

The debate started after a farmer asked all six general election candidates for their view because he said the issue has led to a lot of debate in the IFA and elsewhere.

The pylon issue was raised by another farmer, Colm Fingleton from Ratheniska, who has campaigned against an Eirgrid pylon plan and substation earmarked for his area.

He told the meeting in the Abbeyleix Manor Hotel, that the “powers that be in this country have thrown us under a bus in Ratheniska.”

Dismissing as “a charade”, consultation he said State bodies “walked all over” the community.

Mr Fingleton said his area and surrounding countryside would be destroyed by pylons He said everybody had deserted the community apart from Sen John Whelan, Cllr Padraig Fleming and other in dividuals.

Fine Gael candidate Charlie Flanagan said he was happy to address the issue because of a campaign which called on people to vote against candidates who were deemed to support turbines. The campaign targeted Minister Flanagan and others.

“I address this having been the subject of a very personalised, vindictive and malicious campaign by certain individuals and if I was a litigious type of person I can tell you I would be spending a lot of time in the high court. Some of the things that were said about me were clearly wrong. I have never promoted any development of private windfarms in this constituency,” said the Fine Gael candidate.

The Minister said there was a place for wind energy, but not at all costs.

However, he said he could not stop any farmer from engaing with wind turbine developers - “that is their right”.

He said the country could not continue to rely on oil and other fossil fuels for energy but he did not see Laois windfarms as being the solution. He added that he 'didn't care' if that was a NIIMBY - not in my back yard attitude.

He was challenged from the floor by Mr Fingleton who said it is 'not true' to claim as Mr Flanagan put it that there are people in Ratheniska who entered into “certain contractual arrangements that are honoured by law.”

Sen John Whelan said it was time to stop pretending that Ireland was an energy producer. He sais the country was a food producer and should import energy.

“Communities should not be convulsed and divided. It is a horrendous situation that is causing untold damage with no economic benefit to rural communities and economies,” said the Labour Party candidate.

Sen Whelan said there were alternatives such as bioenergy which could create 5,000 jobs. He said wind was not reliable.

Brian Stanley said there must be regulations, and not guidelines. He said county councils should be given back the power to decide on turbines.

He said the Government had “put all their eggs in the one basket of wind” rather than exploring a range of alternatives renewable power sources.

He said electricity must go underground and not on pylons.

Sean Fleming said there must be 'statutory guidelines' on windfarms.

He said the developers of windfarms were putting their hand in the pockets of Irish taxpayers for tax reliefs. He said that if subsidies were not given there would be no wind turbines.

“As of now the Irish taxpayer is subsidising all of these, apart from the problems it is creating in the community,” said the Fianna Fáil candidate.

He said there had been a successful campaign in Killeshin to have a windfarm moved further from houses before being built.

“I have lost friends over it, families are divided. It is a very very difficult situation. I believe there should be more consultation as communities are left destroyed,” said the Fine Gael candidate.

Sinead Moore, the Green party candidate suggested that there may be a place for wind energy, but on a smaller scale.