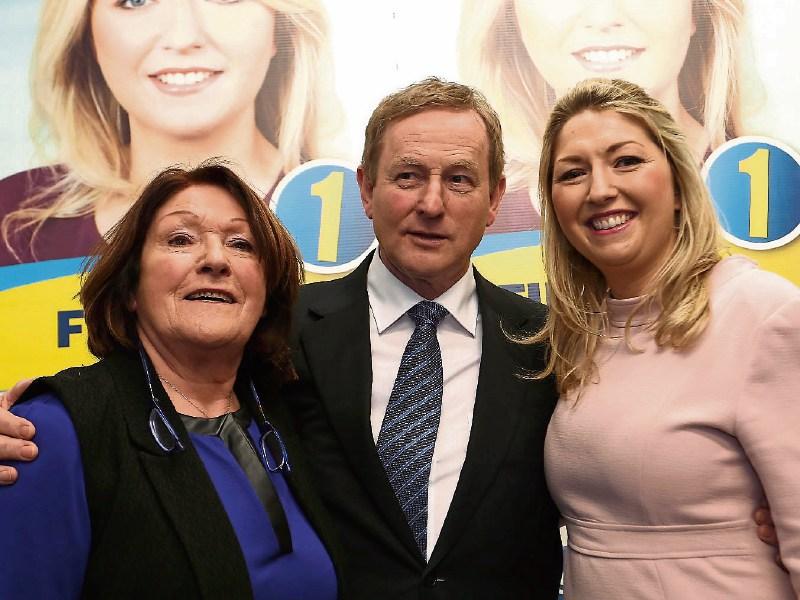 If hardwork gets you elected then Thomasina Connell believes she has done what it takes to get elected.

Added to the Fine Gael ticket late last year, Thomasina says she has knocked on as many doors as she can and met close to 10,000 people over the last four months.

A decision by the Fine Gael Laois strategy committee meant the second Fine Gael candidate wasn't allowed to put posters up in Portlaoise, which Ms Connell says has made things more difficult for her.

“It has been difficult at times, I don’t have paid stuff, I don’t have an office. Everyone that is out with me is volunteering and really want to deliver change and want to help me get there.

Ms Connell continues: “The divide on postering, hasn’t helped me. It was a decision made by the strategy committee of Fine Gael in Laois. I didn’t agree with it and I've had to to work twice has hard as every other candidate to get my name out there.”

Along with the traditional door to door canvas, Ms Connell has also been using social media to get her name out there.

But she doesn't think that social media can replace the canvas.

“You have to have an awareness that although you are in the election zone, it's not that person's priority at that moment. But for me as a first timer, it's about getting to as many people as I can.”

Ms Connell is quick to dismiss any suggestion that she is only part of the race to make up the numbers for Fine Gael.

She says any suggestion at the start that as a female candidate she was part of a gender quota, just made her work harder.

“Perhaps all of that at the beginning made me acknowledge that I would have to work twice as hard as anyone else, which is unfortunate that that is the way society would think. That as a woman your just making up the numbers or part of the quota.

“But I think because I worked so hard I don’t think anyone can say that I am a token anything.

“I got out before all of the other candidates because I had to raise my own profile - let people know who I am.”

Ms Connell thinks that reforming the Dáil and making it more 'family-friendly' would do more for encouraging women into politics than any gender quota would.

“That's one of the things that I would really like to reform. Whatever political parties have done to encourage women into politics , it hasn't happened organically and now we've introduced gender quotas. If we just made the Dáil more family friendly it would go a long way in raising awareness of women getting involved and being able to get stay in it.”

Ms Connell continues: “I'm here stepping out of my own life too and I'm not taking a seat from a parent, but I think when you make that decision to do it - you know what's ahead of you.

“I think some people whose family were involved are more reluctant to go into it, because their parents were away or it's a 24-hour job and perhaps we have to get away from that.”

A solicitor by profession, Ms Connell feels that she has something different to offer the electorate of Laois and South Kildare compared to the other candidates.

“I think I am people's best chance to make changes - I’m not superwoman, but I have experience. I’m energetic and enthusiastic. I’m 33 so I’m going to be around for a long time and I’m 100% committeed to dealing with the problems.”

While some candiates might just test the water on their first time out, Thomasina truly believes she can win a seat and become the first woman to represent Laois in Dáil Eireann.

“I'm really confident that I'm going to get elected. For me it's a matter of getting out and meeting people. If people have only read about me or seen my poster, they can't get a feel for who I really am.

“We have never elected a woman here in Laois and I really want to be the first one. I believe I've so much to contribute.”

The main issues in this constituency, as Ms Connell sees it, are the hospital and jobs.

“I find it difficult to reconcile with the fact that we are a first world country with such a poor health service. But I really want to contribute as part of the next Government to getting it right. I think the government have to be 100% committed to Portlaoise, it’s not good enough just to keep it open, it has to have the services too. I don’t think it’s too late. There is money there, we need to put it into Portlaoise Hospital.”

The Fine Gael candidate would also like to see a focus group investigate the low rate of Laois students attending third level education.

“We're only 50 minutes from Trinity College and UCD yet only 39% of Laois students attend third level college. This needs to be looked at. People here are smart, we have excellent schools so what’s stopping us from progressing to 3rd level.”

Ms Connell continues: “ A lot of people are fed up commuting, we all know the government doesn’t create jobs, a government just creates the framework to do that.

“I think it’s regrettable that so many people are commuting to Dublin, like I was. We have to do something about it, but we can’t always be looking to the IDA. We have the transport links and we definitely have the people.”

High-speed broadband, Ms Connell say, needs to be delivered earlier than 2018, as promised by her party.

“Fine Gael are committed to rolling out high speed broadband by the end of 2018. I think that’s too long for us to wait here in Laois, we need to focus on getting that as soon as possible. It's one of the biggest factors an industry will look at when coming to set up here.”

Ms Connell also feels that extra gardai should be part of the National Security Plan rather than a political decision.

And in relation to the rising crime figures, she says that the courts and deterrents need to be looked at also.

When asked if she thought Fine Gael would go into partnership with Fianna Fail to form the next Government, Ms Connell said this was a matter for the voters to decide.

“At the end of the day, it's all about mathematics. Traditonally, Fianna Fail and Fine Gael would have had opposing policies but nowadays we're not so far apart. It's up to everybody who votes and what the results of the election will be.”

Ms Connell continues: “In terms of stability for the country, we're looking for people to re-elect the current Fine Gael/Labour Government. We want to be at the forefront of the Government.

“Things have got better because the Government put in the framework for that to happen. But it was the people who worked away and paid more so we could get back on our feet. I'd really like to see the same Government get back in for another five years to get us really going again.”