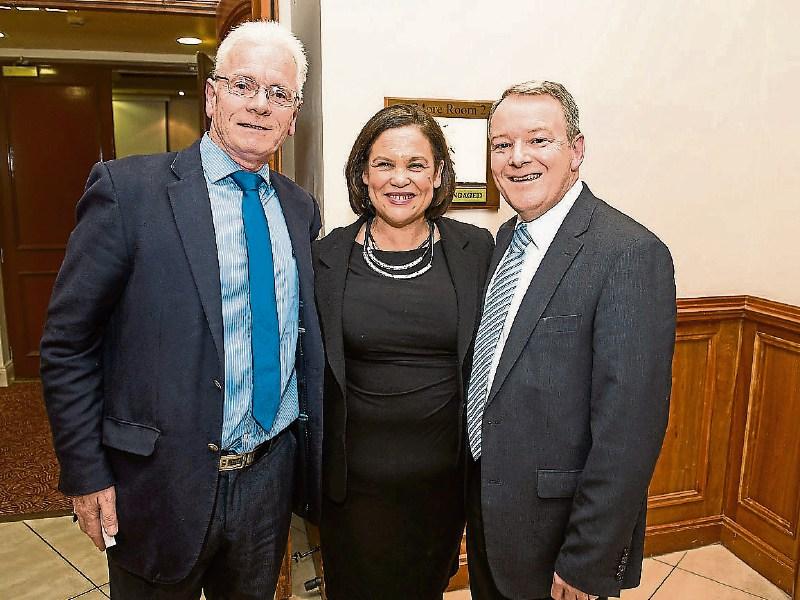 Sinn Fein is just a vehicle for social change, according to Brian Stanley, and he’s realistic enough to acknowledge that it could take a few terms in government for his party to change Ireland into the country its people deserve.

“We have to try to get some measures for fair recovery and sustainable economic recovery, not just boom and bust, by improving public services in the areas of health, education, childcare and policing,” he tells the Leinster Express. “It will take two full terms in government to do that.”

Promising to deliver “a progressive, fair society,” the outgoing Deputy Stanley believes that Ireland needs to start taking responsibility for its own governance rather than remaining “an outpost of Brussels” where the power of the EU extends “into every house in Ireland, into every corner of the land, into every bog drain, into every hen house”.

“Is that healthy that that’s happened? What about the people we elect here? Decisions have to be taken as close to the people, or democracy falters,” he states.

Laois man Stanley prides himself on being very much a man of the people, regularly taking time to listen to the problems of local people bringing a variety of issues to his constituency office on Church Street, Portlaoise. Indeed, there is something of the confessional box about the intimate inner office, complete with small wooden pew for supplicants to sit, where he listens to his constituents’ troubles.

Top of the agenda at the moment is health, both physical and mental. With some 460,000 people waiting to access hospital treatment, health provision is one of the redline issues in Election 2016, here in a country which spends more on healthcare than any other except America, when one factors in taxes, consultants fees, and the cost of going to chemists and GPs.

“Mental health has come up more times on the doorsteps than any previous election,” Deputy Stanley reveals, something which he attributes to the stress and grind of modern living.

Naturally, the hospital in Portlaoise is one of the main issues being raised, and he slams the current Government for presiding over a situation where an internal report was commissioned which could lead to the emergency department being closed.

“The report was to be published in September, and the Labour/FG government have pushed it under the cushion under after the election. Why wasn’t it published in September? I was told it was sent off to officials; we should see it, we’re the elected representatives. Why isn’t it being given to TDs, local press? It’s a massive issue.”

“On Mountmellick, what do we get? A promise of a public/private partnership that will be delivered in 2021, that could be two or three governments away,” he says.

“The other parties are continuing with that mix of private and public, Fianna Fail want to continue with that, we’re saying something very different, we should have a national health system, a universal health system, which is the cheapest,” says Deputy Stanley.

The reform of health will take two terms, he says, claiming that Sinn Fein will put €86m extra into A&Es and €30m extra into medical cards.

On education, the party has budgeted for 1,000 extra teachers to reduce class sizes by one: “That’s not enough, we recognise that, but we’re realists,” he admits.

“We can’t do it in one year, but we’re committed to doing it progressively. Our opponents are pulling figures out of the air, what they’re putting forward is fantasy, quick fixes. It can’t be done like that… there’s no pot of gold at the end of the rainbow.”

Indeed, the public pot of gold seems to have been plundered quite ruthlessly by the recapitalisation of the banks, and Deputy Stanley restates his party’s line that we should have let Anglo-Irish go under. The Sinn Fein economic plan would favour taking more tax from people who are extremely well paid and giving tax rebates to people who are on lower incomes, such as those on the minimum wage.

He laments the “totally unsustainable, bankrupt economic Fianna Fail policies” which led to the “wild west nature of lending and wild west capitalism” that caused the crash.

“You and me and people on the streets, they’re paying debts for other people. People on minimum wage, people who struggled, the disabled, they’re paying for it, the ordinary people were hit with this. What the Government are doing is really keeping the burden going on the Irish people.”

While Deputy Stanley paints his party as very much looking to the future, it is the past that perhaps has been most problematic. Describing efforts from certain quarters to dredge up Sinn Fein’s connections with the IRA as an attempt to smear and distort Irish history, Deputy Stanley invites his Sinn Fein opponents to consider the wider historical details of the State’s brutal, bloody birth.

“Will we discuss Michael Collins having people carried out of hospital on a stretcher and a revolver being put in their mouth and shot? Men being shot in their beds beside their wives in 1920, 1921, ‘22, ‘23, do we want to discuss that?” he challenges.

“The problem for these people is to recognise that Republicanism won the war in terms of forcing the British to negotiate, and smashing the Orange state. I’m sure our opponents will never be able to get over that. There was a conflict and terrible things happen in a conflict. My own opinion, is always try to do things in a peaceful way, war is the last option.”

He says he is “amused by the number of people who claim to have had relatives in the GPO, I’m amused by the rush by establishment to commemorate” the 1916 Rising, although he is quick to welcome such commemoration, as the Rising “belongs to everyone, the legacy of 1916 belongs to the Irish people”.

Highlighting the importance of getting back to a better “quality of life” for everyone, Deputy Stanley asks: “Unless we deal with quality of life issues, what’s it all about?”

Hopeful of a strong showing for his party in the forthcoming election, following three candidates elected in the constituency last time round, Deputy Stanley promises that first and foremost he will remain committed to fighting for a fairer society for all.

“Here in Laois, I’ve tried to operate a huge constituency service for the last five years, and if re-elected I will continue to do that, but hopefully in the next Dail,” he vows.