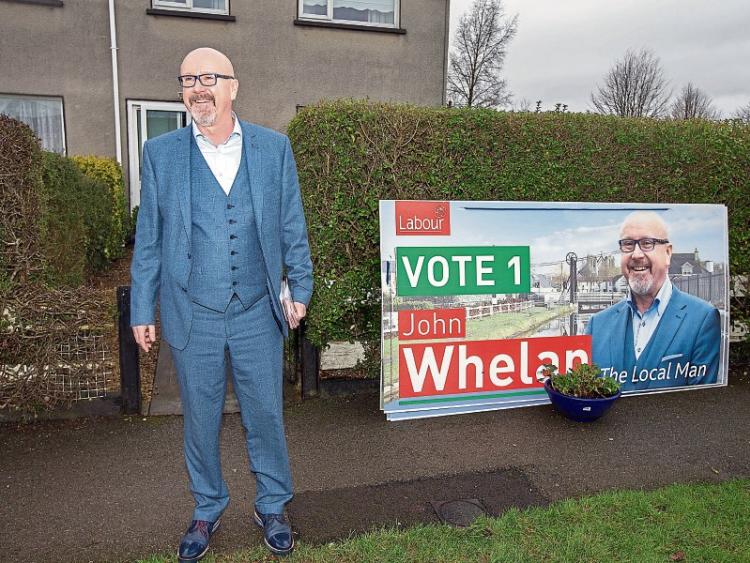 John Whelan first entered the electoral fray in 2011 as a freshman candidate for the Labour Party.

In that other February election, he garnered a first preference share of 5,802 votes.

In the wake of that performance, the Labour Party perceived a viable performer for the future, and implored the former newspaper editor to run for the Seanad.

Election duly followed, and a five year term in the upper house.

Whelan has been a prolific Senator, and has been vociferous on a number of issues.

As polling day looms, he makes the point that he is the nearest to an Independent minded candidate in the constituency, and points to a number of issues relating to Eirgrid, the HSE and the EPA to support this.

However, he remains a strong proponent of working within the party structure to achieve results .

“I am no lapdog. You can achieve more results within the party system, than being outside it. I network with Ministers, colleagues and people across the political spectrum to get things done.”

He is emphatic on the point that he is in the hunt only for a Dail seat.

“It's a Dail seat, or nothing,” he states. “I won't be running for the Seanad again.”

This straight up candour is something Whelan puts a lot of stock in, and is something which he believes the public responds well to.

“I would rather tell the truth, than mislead anyone. I will stand up and be counted,” he states.

It is a stance he assumes on any myriad of issues, and in recent times it has been most evident in relation to the future of the 24/7 A&E service at Portlaoise Hospital.

“If elected, I will hold the next government to account to protect the A&E in Portlaoise, regardless of the personal and political consequences,” he vows.

And, during the course of this campaign, the Senator has found that concerns over the future of the Portlaoise A &E service is the number one issue on the doorsteps.

“It is, in many ways, the singular defining issue of this campaign. It is not only me saying it. The GPs have no political axe to grind, they are the lynchpins of their communities.

“They have made it clear that the future of Portlaoise hospital is at stake and at risk if 24/7 A&E is taken away from the hospital.

“The HSE double cross is on the cards. A&E is under huge pressure.

“There is no capacity in Tallaght, Tullamore or Naas. And with all respect, Portlaoise is not Roscommon.

“Portlaoise hospital is catering for a population of 250,000. There are 2,000 babies born in the Maternity unit every year, and paediatrics is very busy.

“A large volume of people attend outside the 9-5 time period. People do not get sick only between 9am and 5pm.

“And this is not even bringing the huge volume of traffic and the prisons into the equation.

“We are now at a defining moment for the hospital in this community. Closing the A&E has profound implications for GPs practice, and nursing homes.

“On the doorsteps the fear of losing A&E, and its implications, is palpable. Closing it will have a knock on effect on maternity and paediatrics.

“This is the busiest hospital outside of Dublin.

“The Labour Party has put forward ten reasons to retain and invest in the hospital.

“There is a way of stopping this from happening. There is no point crying about it after it has happened.”

This time around the Senator finds people are more familiar with him.

“They know my form and the way I work. It's accepted that I do not just go through the motions. I take a strong, robust perspective on issues.”

The new redrawn constituency is something that makes the contest more intense, he finds.

“There are only six candidates in the field, but that makes it more competitive.

“Look, the outcome of any election is determined by the final number of seats.

“There is a defined result for the first two seats in Laois. Sean Fleming and Charlie Flanagan are a foregone conclusion. The third seat is a dogfight.

“What happens in any number of these final seats is hugely significant, both locally and nationally.

“We are putting forward credible, constructive and coherent policies. It is not the politics of negativity and protest that is Sinn Fein.”

Senator Whelan feels that the boundary review is advantageous to him.

“The boundary review brought in Monasterevin, Kildangan, Nurney, Kilberry and Castlemitchell. I'm from St Evins Park in Monasterevin, my mother still lives there, and my sisters are married in the town.

“My late father Paddy was involved in everything in Monasterevin, from the GAA to Community Games, the campaign to re-open the train station to the town park. He was one of the first people to set up a residents association anywhere in the country in the mid-1960s.

“The Labour vote is strong there. This is Joe Bermingham and Jack Wall country. In the local elections it elected two Labour Councillors.

“There is a sense of Monasterevin been marginalised. People want it addressed in terms of health services, we got two new schools in the pipeline, and more amenities and facilities are needed.”

He remains an enthusiastic advocate of the Garryhinch resevoir project.

“We have to take the initiaitive. Not only would it create jobs, it would be an eco park, recreation centre and an anchor for tourism in this region. It will create hundreds of jobs. The construction phase alone would see up to a 1,000 jobs.

“We cannot wait for the IDA. They have failed over the past 20 years. We have to take responsbility ourselves.”

“Eight million tourists will visit Ireland this year. I think we have been bypassed in Laois.

“The tourism product is there. Projects such as these have the potential to transform our economic landscape.”

Senator Whelan has also been an opponent of windfarms.

“Kildangan Stud, which employs 200 people, have said that they will close up if windfarms are put on top of them.

“There are no jobs, no co2 benefits in windfarms.

“They are a corporate driven pyramid scheme.

“I am in favour of renewables such as bio-energy, anaerobic digestion, and the District Heating System. It is these kind of projects we should be championing.”

On law and order, he believes that garda stations in towns like Portarlington and Mountmellick need to be open on a full time basis. A Sergeant should be in situ in these towns, and they need to be properly staffed.

“Policing cannot be done remotely, or by a door buzzer or text alert.”

Senator Whelan believes he can benefit from an independent vote on Friday. Time will tell.