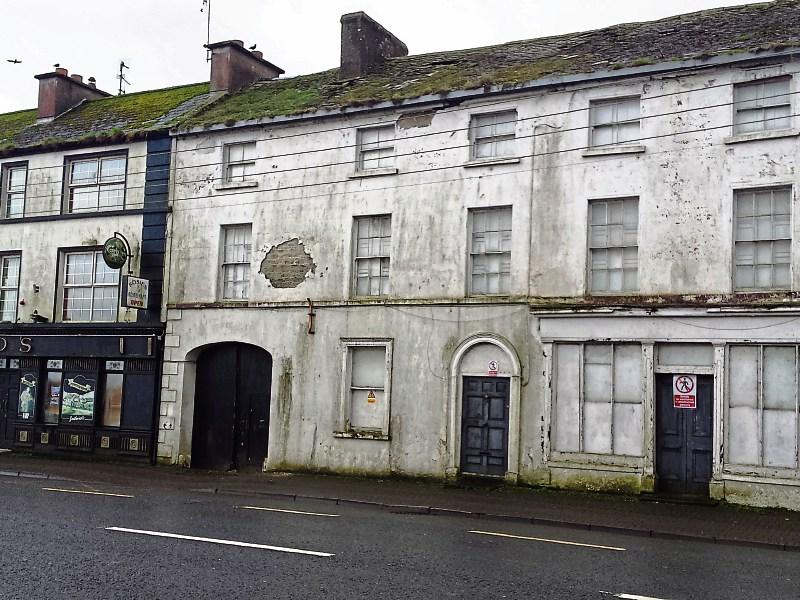 A long derelict pub in Borris-in-Ossory remains a danger to pedestrians, with fresh legal action underway by Laois County Council.

The authority had taken the receiver to court last summer, after a Dangerous Structure Notice did not result in any action to make the listed building safe.

Just before the court case the receiver erected wooden hoarding along the path, stating in court that a sale was at an advanced stage.

“A couple of days later the hoarding fell down and the sale was finalised but since then there has been a complete lack of action and slates and plaster has been falling on the footpath below,” said local Cllr James Kelly.

He recently requested that the council issue a Dangerous Structure Notice under Sanitary Services Act 1964 to the new owner, and has ascertained that legal action is again underway.

“Laois County Council has identified who the new owners are and have been in contact with them to make safe the building but to no avail. The council have now issued court proceedings, due in April,” Cllr Kelly said.

Formerly White’s Pub, the business and adjoining house is vacant for about 16 years.

““For health and safety reasons, we can’t put up a partition in case it falls down and hits someone, we would be liable. We can only do so much. A covered walkway is the only answer but no-one seems to be taking responsibility,” Chairman David Fitzpatrick said.

“We are thinking of the safety of our children walking to school. In the rough weather bits of plaster have fallen off. We know slates are falling off, and it is a very high building. It is dangerous for anyone walking down the street. No-one seems to be helping Borris-in-Ossory,” he said.

The village suffered badly since the recession began, with the closure of pubs, shops, the Leix County hotel now boarded up, and the garda station.

“I live in Ossory Court. Many of the empty houses were bought recently by a buyer, and people are starting to move in and do them up. It’s a small bit of activity but it will help businesses in the town too,” he said.

He believes that traffic coming through the village to avoid the motorway toll could boost retail business.

“Our project in Tidy Towns this year is to enhance the Roscrea approach to the village, so that cars might decide to drive through the village instead of taking the motorway. The council are helping us with that,” he said