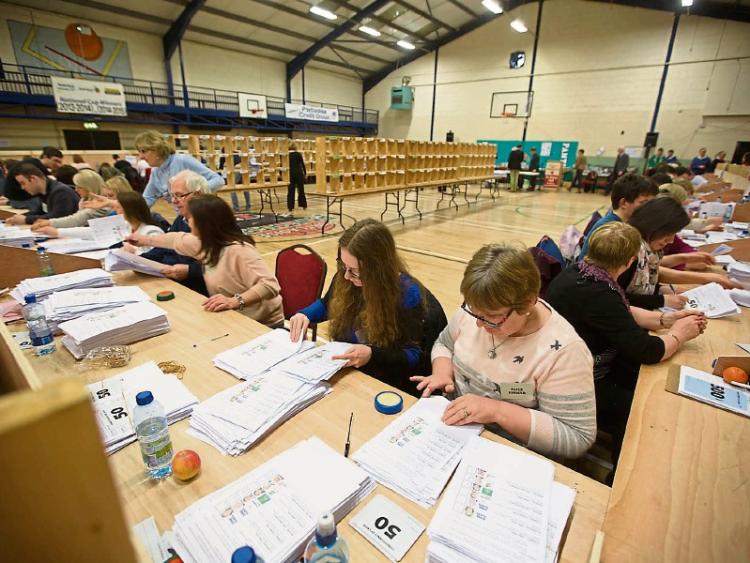 There was an eerie inevitability all day at the Laois count centre at St Mary's Hall in Portlaoise last Saturday.

Predictions in advance were that barring some sort of miracle or major campaign issue there would be no change in Laois' representation in Leinster House.

But the outcome had some interesting lessons for all the candidates and parties.

Fianna Fáil's topping of the poll with 13,626 was an impressive return, especially for its candidate Sean Fleming. In 2011 he polled a little over 6,000 votes. This year's result also made him the 5th highest vote getter in Ireland - ahead of Enda Kenny.

In the context of 2011 and and FF's return to form in Irish politics, the result was positive.

FF's members were not just happy with the result but also pleased that they have re-built an organisation.

However, the result cannot be seen as overwhelmingly positive.

The party ran just one candidate. This strategy was imposed by HQ against local wishes.

Splitting 13,600 in two would hardly return two seats except for the fact that the second candidate could have been John Moloney.

There will surely be a big push in the party locally to run two the next time, but pehaps now was the chance to lay claim to the second seat.

The other point to note for FF is that SF now holds two seats in Laois and Offaly so the losses of 2011 have not been reversed even though this was a much better election for FG.

Sinn Féin's Brian Stanley was distracted by John Whelan right through the campaign, he would have been under fierce pressure if Fianna Fáil were also in the race.

The problem for FF now is that Brian Stanley has got a big endorsement in the face of a sometimes personalised campaign.

Sinn Féin will never run a second candidate and will be expecting a FF challenge next time around and will be ready for it.

The SF camp will come out of this campaign more pleased than FF or Fine Gael.

Brian Stanley's retention of his seat means he can now start the process of making Sinn Féin a permanent force in Laois politics.

The more secure his postion the more SF can build locally through electing more councillors etc.

They will be overjoyed at seeing off a Labour challenge which left a bitter taste in Stanley's team.

Fine Gael say they are happy with the outcome as their share of the vote in Laois was higher than the FG national average.

However, this echoes a sentiment expressed by FF after the 2011 election when FF held two of its three seats in the Laois Offaly constituency.

It was like winning a skirmish in a massacre.

But unlike FF in 2011, FG was never under pressure this time around in Laois even though many seats were lost elsewhere.

It will irk Charlie Flanagan that he came third behind a SF candidate but he has taken satisfaction from the fact that there were more than 12,400 first perferences votes for his party in Laois.

This total is not too far behind a FF vote that had some momentum.

The outgoing Minister for Foreign Affairs and Trade expressed his satisfaction at the performance of Thomasina Connell.

A Ballybrittas native, with Portarlington connections, she set up shop in Monasterevin.

It was this strategy combined with an energetic campaign that paid off.

Ambitious and talked of already as possible TD, Ms Connell is yet to committ to a career in politics. As long as Charlie Flanagan is an incumbent, it will be difficult to see a gap opening for a second FG TD.

The most disappointed candidate has to be John Whelan.

The outgoing Labour Party senator threw as much into the campaign in energy and resources than any other candidate.

Ultimately he faced several obstacles that just could not be surmounted.

Voter anger against Labour was probably at the top of this list Many local public servants voted Labour last time to protect against pay cuts. It may have been payback time for this group.

Sen Whelan may also have made a few bad moves locally. Confrontation with SF over the IRA did not pay off.

He also may have erred in the last week during an interview on local radio about Portlaoise's guardians of the elderly.

Sinead Moore's first foray into politics with the Green Party was more successful than many anticipated. Some 1,541 gave her their number one vote this time around.

Overall Laois needs more candidates next time around to ensure the big three do not take the elector for granted.