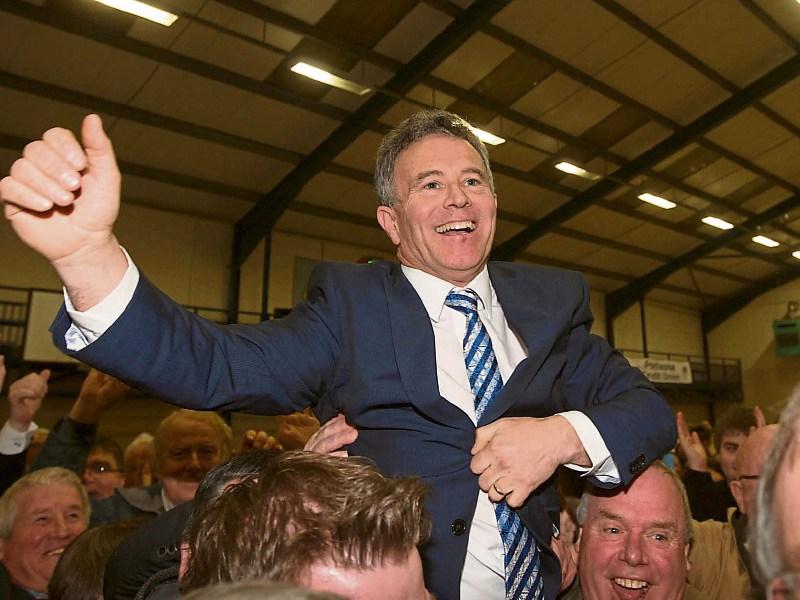 Poll topper Sean Fleming had his cake and ate it on Saturday, quite literally.

The count day fell on his 58th birthday and, with exquisite timing, following the announcement of the first count and his election with a whopping 13,626 votes, a birthday cake with candles was produced.

It was a sweet moment for the Castletown TD, who was first elected in 1997.

This time around he found himself the standard bearer for the party in the reconstitued Laois constituency.

While a large vote was predicted, the scale of it astounded many within Fianna Fail themselves, and certainly outside it.

Party members and activists had more to digest than their food at lunchtime on Saturday, as the enormity of Fleming's vote set in.

The early tallies clearly suggested the nature of the sweep.

Confirmation came when the first count was announced at around 4pm on Saturday afternoon, and ebullient supporters hoisted their man shoulder high on the strength of a first preference showing of 13,626.

For his own part, Sean Fleming said he was genuinely surprised with the nature of the result.

“People told me I was going to do well, but I did not expect the scale of it.

“We did very well here in the local elections of 2014, and I did not expect to beat that.

“We worked very hard and put in a huge campaign in Laois and south Kildare.

“In some places people told us we were the only canvassers who had called and that included parts of some towns as well as rural areas.

As to the make up of the next government, and the likelihood of a coalition, he said that he would prefer that Fianna Fail remain the alternative to Fine Gael.

“It’s not my preference to go into coalition with them.

“I would prefer to keep us as an alternative to them.

“But there will be a lot of pressure from Fine Gael for us to go in with them.”

Sean Fleming said he was happy early in the campaign to go with a two candidate strategy.

“I was very pleased that Catherine Fitzgerald was on the ticket.

“She withdrew for personal reasons.

“And when that happened, there was not time to revisit the strategy.

“It is difficult in a three seater to dislodge three outgoing TDs. It is always hard to dislodge an incumbent,” he stated.

Padraig Fleming pointed out that Sean Fleming led in 92 of the 109 boxes. He also led in every Kildare box.

“Sean put in a huge canvass in Kildare,” said Padraig.

“He started early last Autumn and often he went up to Kildare on his own to canvass door to door.

“At the beginning of November the canvass then moved to the Portarlington, Killenard, and all of John Moloney’s, area.

“Following the Christmas break, the canvass resumed around January 9th.

“We were in places where no other candidate had been,” he added.

Many party members who worked on the campaign noted the lack of hostility towards the party this time around, as opposed to the 2011 election.

“Fianna Fail are back in the county. This result proves that we can run two candidates.”

Party stalwart Willie Murphy from Portarlington said he was delighted to see such a turnaround in the party’s fortunes.

In his victory speech on Saturday evening, Sean Fleming thanked his wife, family, and supporters for their work over the course of the campaign.