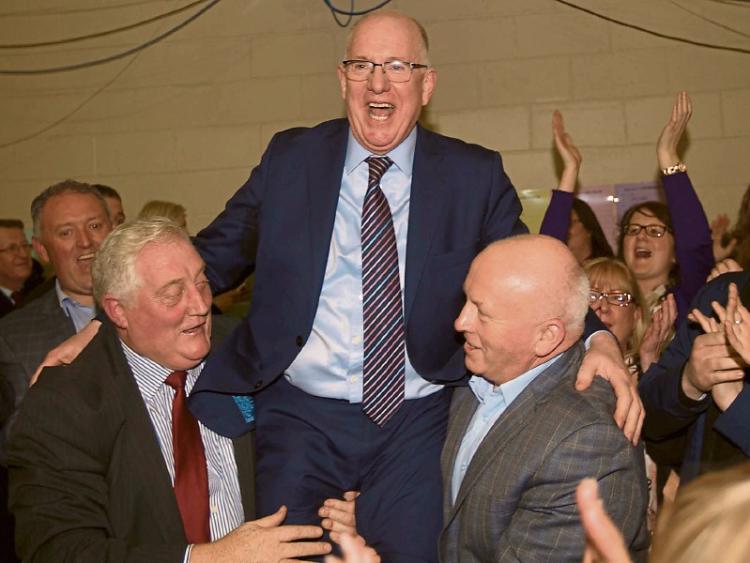 Despite his third place finish outgoing Government Minister Charlie Flanagan was pleased with the outcome that saw his party's performance in Laois buck the national trend.

The combined Fine Gael first preference vote was almost a third of number one seats with Mr Flanagan taking 8,370 of these votes.

“I am particularly pleased in Laois that we have succeeded in bucking the national trend by securing in excess of 32% of the vote for Fine Gael on what is a bleak and disappointing day nationally,” he said.

He said he would not have asked for more votes for the party and he is not disappointed with his own vote going into the election as a Minister. He believes his vote was not inflated by the small field of candidates because he was the main Government candidate.

Nevertheless, he said it was a great honour to be returned by the people of Laois. He puts the higher than average vote down to a good campaign in “difficult circumstances”.

“I admit that there were challenges on the doorsteps and that there were unique and special circumstances in this constituency and I refer to Portlaoise hospital which was an issue in the campaign, and the wind farm issue,” he said.

Mr Flanagan said he looked forward to working on the hospital issue in the lifetime of the next Government.

“This will be an urgent and important priority for me as I accept that there is huge concern,” he said.

He added that this would be his aim “irrespective” of his status in the Dáil.

While Portlaoise hospital topped concerns, the Minister said there were a multiplicity of other issues raised on the doorsteps.

“There was a cocktail of grievances, property tax, water charges, health, crime, public sector pay. I have never experienced an election with such a multiplicity of grievances on the part of the Government,” he said.

Having said that, he said a stable government is now needed.

“The economy is in recovery mode and it is dependent on stable government to continue in terms of business, investment, job creation and maintenance. Stability and certainty in the political sphere are important. If we cannot get political stability we will be back on the (election) road before long,” he said.

As to what would give stability he said it was up to all TDs returned to Leinster House to decide this.

“There is a duty on 158 TDs to elect a Government. The people have spoken and elected representatives are now charged with the responsibility of responding,” he said.

Speaking in the count centre last Saturday he refused to comment on a coalition between Fine Gael and Fianna Fáil or the shape of the Government.

This was Charlie Flanagan’s eight Dáil election. He said his father Oliver J fought 14 elections. Asked about how long he saw himself continuing in politics, the outgoing Minister showed no signs of stepping aside.

“I enjoy politics. I am both honoured and privileged to have been given a further mandate by the people of Laois and the new area of West Kildare. I look forward to fulfilling that mandate,” he said.

He said he would look forward to being reappointed Minister if Fine Gael returns to Government. Asked if he would place money on FG getting back into power he said:

“If we are the largest party we are the most likely to form a Government,” he said.