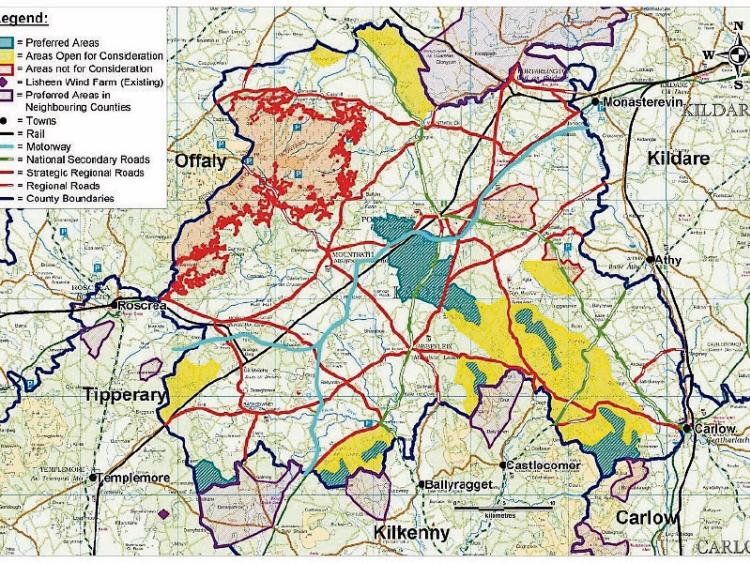 The IWEA is urging Laois County Council to permit turbines in protected areas “under exceptional circumstances”, which a spokesperson claimed does not include the Slieve Blooms.

The Irish Wind Energy Association made a submission last December to County Hall on the new County Development Plan 2017 to 2023, asking them to make changes in favour of windfarms.

The association is urging Laois County Council to reclassify its zoning of areas suitable for wind farms in its new Wind Energy Strategy.

“The WES 2011 states that there are no 'Strategic' wind farm areas in Laois and designates specific areas as ' Areas not open for Consideration.. We strongly urge the council to set out more clearly the methodology and evidential basis for these classifications. Such areas should be reclassified allowing for an ‘exceptional circumstance’ provision in the CDP 2017,” the IWEA say.

They say that future advances in technology could “mitigate potential impacts” on the environment.

The largest area in Laois that is zoned as “not open for consideration”, is the Slieve Bloom Mountains, a Special Area of Conservation.

Other smaller protected zones include the Rock of Dunamaise and the Windy Gap outside Stradbally.

No areas are zoned “Strategic”,or ideal for turbines.

However the council has zoned some small areas as “preferred”, and larger zones “open to consideration”.

Aa spokesperson for the IWEA says drawing any link to possible future windfarms on the Slieve Bloom Mountains, is “inappropriate”, because it is not mentioned in their submission.

“It’s not wind energy everywhere, it’s wind energy in the right places. Any planning has to be properly assessed in accordance with natura habitats. We are asking for clearer designations, that helps everyone,” he said.

Asked if Laois should take a larger share of Irish windfarms, the spokesperson said “There isn’t a county by county breakdown. Different counties have stronger possibilities”.

On the strong Laois resistance to windfarms, with national groups like Wind Aware Ireland based here, he said “people are entitled to their views when they have concerns”.

“They might not have seen them up close, or have the full facts. We have information on windenergy.ie, and people can visit Mount Lucas in Offaly where there are walkways open 365 days a year,” he said.

In their submission, the IWEA also wants specifics on how areas are zoned.

“We strongly urge the council to set out more clearly the methodology and evidential basis” it says..

It says protected sites should not be ruled out in the County Development Plan, but rather at “development control stage”.

“While we advocate applying the precautionary principle to protected sites, the potential of such areas should not be automatically ruled out for wind energy development at a strategy level,” the association said.

The IWEA intend to make further submissions, and offered to meet the planners.

Ireland now has enough turbines to power over 1.5 million homes,with wind energy at times providing over half of the national electricity demand.

The country is now third in Europe for wind generated electricity, averaging 24 percent in 2015.

Less than one percent was from the only Laois windfarm in Gortahile.