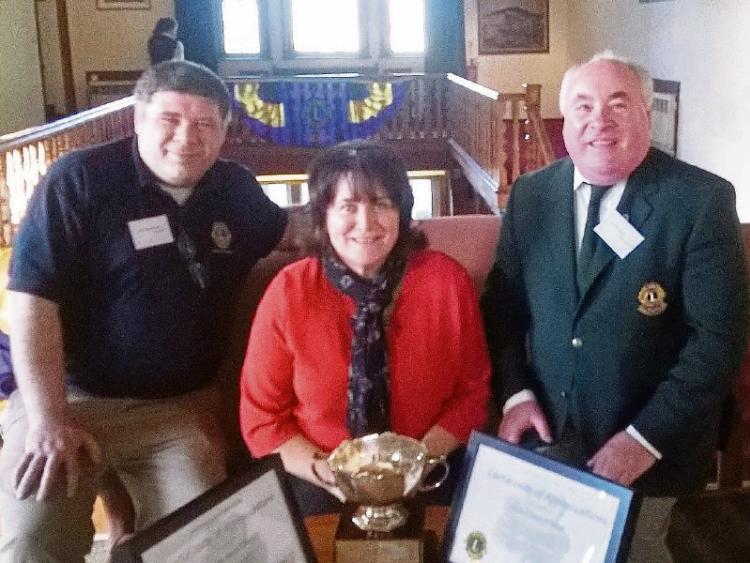 There were big celebrations for Portarlington Lions Club last weekend, after it won the prestigious title of Ireland's Lions Club of the Year.

Such was their record of activity in 2015, particularly in organising the diabetic screening of over 5,000 visitors to the National Ploughing championships, that they were chosen out of 114 clubs across the island of Ireland for the title.

Three members had travelled to represent the club at the 47th Convention of the Lions Clubs of Ireland District 105i in Antrim on March 4 and 5.

With two merit prizes already under their belts on the weekend, recognising exceptional volunteer work by members Shane O'Neill and Laurence O'Keeffe, they were shocked when their club was named for the overall prize.

“It was a wonderful achievement,” said Zone Chairman Willie Murphy, who attended along with club President Colette Kennedy and Regional Chairman Laurence O'Keeffe.

“We are very proud of the club, it is a very prestigious win. it's great for the town, it puts Portarlington on the map within Lions clubs,” said Mr Murphy.

The club held an annual hunt chase, a Christmas food appeal, supported Port scouts to repair their den, ran a church gate collection, a concert, a quiz night, an IPP visit, a family fun day and founded a junior ' Leo Club' in the town,as well as the diabetes clinic, supporting 70 nurses as they tested ploughing visitors.

The club members will not be resting on their well deserved laurels for long.

“We are getting ready for Portarlington parade now, and organising a table quiz. All the money we raise goes directly to people in need. We take nothing for administration and pay for our own paperwork,” Mr Murphy said.

She is the first lady president of Port Lions Club, which now has one third female members.

“To join, people put their name forward, and are proposed at meetings,” explained Mr Murphy.