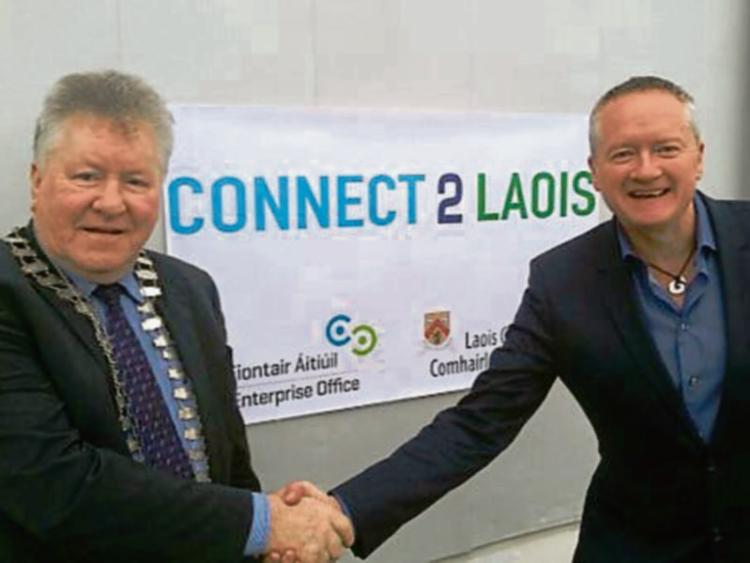 The St Patrick’s Day trip to New York by the CEO and the vice chairman of Laois County Council was hailed as a great success at the April council meeting.

“We were the only county to receive an invite to Gracie Mansion, where we presented Bill de Blasio with the Coat of Arms of County Laois, with Minister for Foreign Affairs and Trade, Charlie Flanagan. I compliment the Laois Association on being so active, they turned up in huge numbers. It was surprising and exciting to see so many people waving the flag for Laois,” said the CEO Mr Mulholland.

On March 16 they had met with IDA Ireland on Park Avenue to outline high speed broadband in Portlaoise and the highly skilled workforce in the county, presenting a new business brochure 'Connect 2 Laois' to the IDA.

On March 18 they visited the Grace Institute in Lower Manhattan, co-founded in 1897 by WR Grace, a Ballylinan native who was twice the New York Mayor, and accepted the Statue of Liberty from France.

The institute was set up to give free education, training and job placements to young women, continuing to do so.

They met descendants of William Russell Grace, presenting them with a scroll and the Laois coat of arms to commemorate the visit and restore links to Laois.

“This son of Laois left a legacy in New York with his humanitarian works. I hope this link can be worked on in the future,” said Mr Mulholland.

Cllr Moran is also from the Ballylinan area, and is hopeful that the Grace family, now spread over 40 states, and “very well off” with a skyscraper in New York, will come to visit Laois.

“I feel we achieved a lot by being there, I would be very surprised if there was not some result. The family want further information from the consulate on where they lived and that is being sent to them. We invited them over and they were thrilled we made something of them, I am convinced we will gain,” he said, congratulating the CEO on organising a packed agenda for the trip, with time in the evenings for “a singsong”.

Cathaoirleach Cllr Catherine Fitzgerald who had sent Cllr Moran in her stead, congratulated them both on their efforts.

Cllr Jerry Lodge said “nobody else is going to shout for Laois”.

“I compliment the delegation, anything that promotes a positive image is to be encouraged,” he said.

Cllr Padraig Fleming congratulated Cllr Moran on his work, “It is great to be out there promoting Laois”.

The trip was at the invite of the Laois Association in New York, It was estimated beforehand by the council to cost €2,200. No-one attended from the council in 2015.