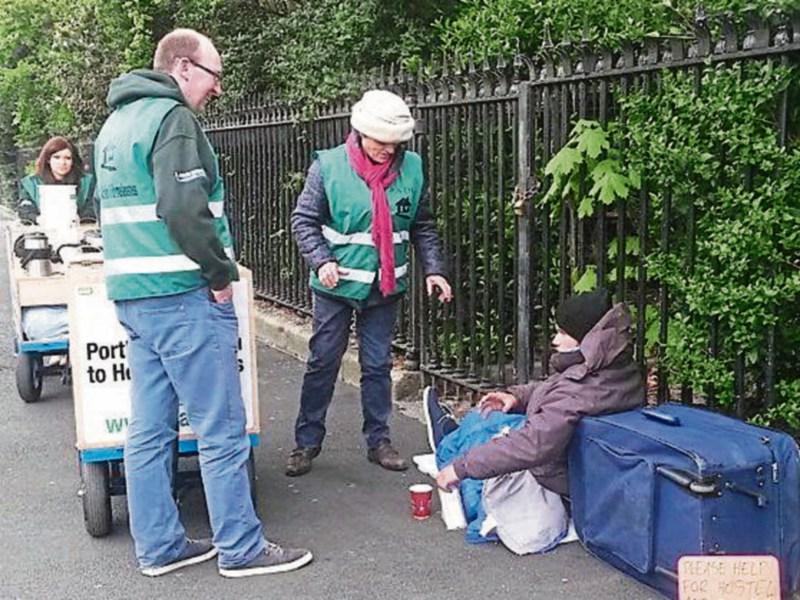 A Portlaoise group which feeds the homeless in Dublin claims many are still missing since being moved on before the 1916 Easter ceremonies.

Portlaoise Action to Homelessness (PATH) volunteers drive to Dublin every Saturday night with hot food for people sleeping rough on the city’s streets.

On Easter Saturday March 26 they became concerned that many of those people could not be found.

“We have got to know a lot of people over the year, who we always meet in certain areas, often they are up side lanes, not in prominent places. The GPO was a great place for them to congregate. A lot were moved on, we went looking that night and discovered one. Some people that we found told us they were moved on by Gardaí, not all of them,” said volunteer Billy Fitzpatrick.

He is unhappy with how the homeless were treated before the national commemoration event.

“The 1916 celebration was a great pageant, but by the same token, it was terrible the way it was done. It could have been handled better,” he said.

A month on, many are still missing from their usual spots. The group cannot find out whether those people got permanent shelter, or moved away, but are concerned.

“We would be concerned when our regulars are missing, we just don’t know,” Mr Fitzpatrick said.

It was “a very strange night” PATH reported on social media after their Easter Saturday deliveries.

“We found that a lot of our homeless friends have being moved on due to the events for 1916 tomorrow. Very windy and cold and the people we met were extremely cold but thanks to the help of kind donations we were able to help them out a bit in the form of hats, scarves and sleeping bags,” PATH posted on facebook.

Formed over a year ago, PATH volunteers drive up every Saturday night to walk the streets pulling an insulated cart with hot food, drinks and sandwiches, donated by Ena’s at the Mill restaurant in Mountmellick, as well as chocolate, clothes, toiletries and sleeping bags, all locally donated.

“When we started we were feeding 50 or 60, now it’s up to 90. That’s probably only the tip of the iceberg. In the last couple of weeks there’s not a chocolate bar left when we finish. There are a lot of really hungry people,” said Billy.

Many are on the streets due to addiction, mental problems, or family issues.

“We sit and talk with the people we meet, sometimes that’s the most important thing we can do. You have to leave your emotions at home, and just do your bit to help,” he said, thanking everybody who supports their work through donations, fundraising or volunteering.

The group welcome new volunteers, and meet on the first Tuesday of every month at 8pm in Portlaoise Leisure Centre.