Laois man's welcome for the fans in green 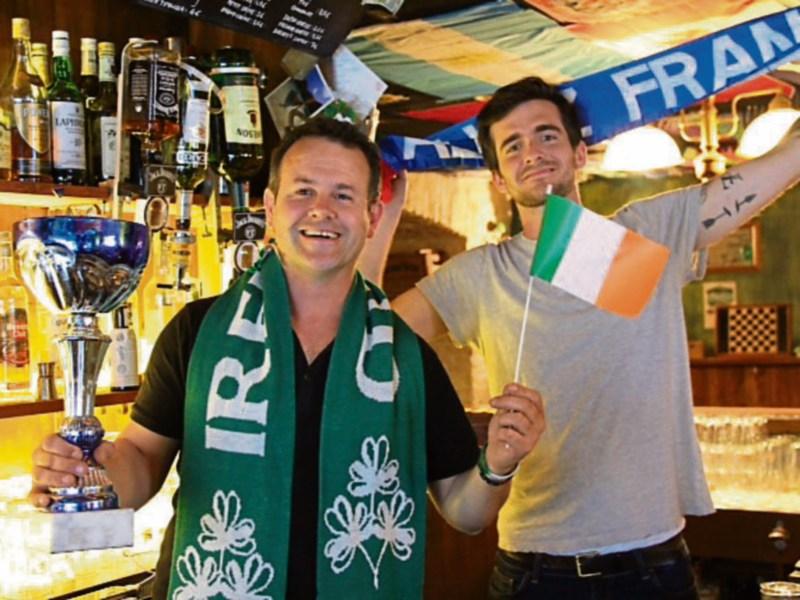 A Portlaoise man is looking forward to fans in green from Laois taking a detour in his direction when they arrive for the Euopean soccer championships next month.

Laois man Noel McNulty arrived in France in June 1997 as a student who wanted to improve his knowledge of the French language and culture through summertime jobs in the hospitality trade on Ile de Re just off the coast of La Rochelle; little did he know that 19 years later he would settle in the town with his family and open his own hugely popular McNulty's Irish Pub.

In September 1997 Noel left La Rochelle to study in Toulouse. While there he met his partner Caroline.

Noel has two wonderful children Martin (14) and Lucas (11). Both young men share his love for Portlaoise, having spent many summers at Noel's parent’s house (Violet and Malachy’s) on Summerhill Lane.

"The boys take great pride in their Laois accents,” both chaps are bilingual and both love sport" indeed it cannot go without saying that they followed both uncles Peter and Malachy throughout their GAA careers.

McNulty's Irish Pub has been open since March 2013. It has an eclectic mix of local trade, visitors and in high season tourists from all over the world who visit this hugely popular west coast French destination.

With the Euros only weeks away all roads lead to France and Noel is looking forward to welcoming all visitors especially the soccer fans to La Rochelle. He was delighted to hear that a few of the entourage from Portlaoise and surrounding areas will be visiting. Including Class of 88 and UBIG Soccer fans on tour.

Noel has a huge sense of pride in being Irish, he also has a huge love of sport and is a massive soccer fan. He, like many other Irish soccer fans, is beyond excited about the ever anticipated Euros and locally it is considered by local press as the ultimate sporting invasion.

“As you know soccer is my game! So to raise the Irish flag with pride and welcome all the fans will be the ultimate hospitality goal.

“It'll give us a great chance to upset the apple-tart in the group,” he said.

Rest assured a welcome awaits you at Noel McNulty's pub with all soccer fans especially the Irish ones expected to invade the city centre in La Rochelle between June 14 and 18 in the lead up to the all-important tie with Belgium up the road in Bordeaux on June 18.

With Irish, Belgians, Welsh, Spanish expected to arrive in La Rochelle it certainly will be the hub.

Noel hopes to welcome all Irish fans especially those from Laois for the big games.