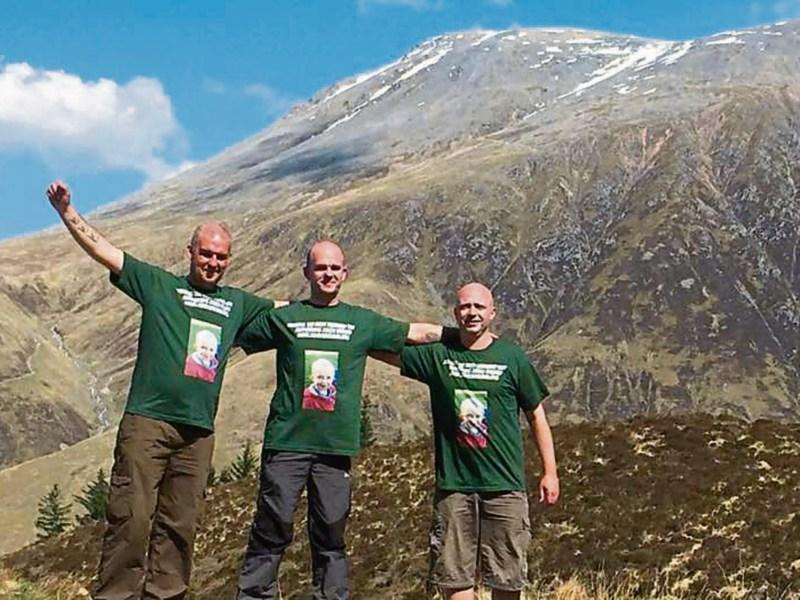 A Scotsman now living in Portarlington has just returned from a gruelling 100 mile hike across his native mountains, all for a charity that helped his son Finn.

Gary Tonner arrived back footsore but happy to his Lough Gate home last Wednesday, having raised nearly €7,500 for the charity 22q11 Ireland by dong the 100 mile West Highland Way Walk.

“It was bloody awful but I enjoyed it, we got the views and the good weather, but it was constant pounding on sharp jagged rocks. The last day we did 17 miles in 26 degree heat,” he told the Leinster Express.

His brother Dave and friend Chris Mannering did the hike with him, sleeping in anything from b&bs to hiking huts for the six day ordeal.

Finn aged 2 and a half was born with a heart murmur, and underwent openheart surgery at three months.

After tests, he was diagnosed with the genetic disorder 22q11 deletion syndrome, also known as Di George Syndrome.

Gary and his wife Rosanne were totally shocked.

“We had never heard of it, and the professors knew little about it either,” he said.

The couple found the support group 22q11Ireland and got in contact with them.

“They were a fantastic support and a font of information to us,” Gary said.

Finn has been in physio all his young life due to low muscle tone, which has caused his spine to curve to develop scoliosis.

He has to wear a body brace for 23 hours a day until he stops growing in his teens, with hopes this will avert a need for spinal surgery.

“Finn will always have ongoing issues. He has 180 different symptoms. But his heart is good now. He doesn't speak yet, his milestones are delayed, but he is great, he is full of divilment like his brothers,” said his proud dad.

The support they got drove the tired hikers on.

“The support via social media and the power of it to fundraise was stupendous, with people sharing our posts and strangers donating, one person we don't know gave €500,” said Gary.

He particularly thanked everyone who supported him in his local pub, the Barrow Lodge.

“The support we got makes the pain of recovery a lot easier. I'm happy I've done this,” said Gary, an engineer based at Intel.

22q11 Ireland is a non-profit organisation that supports over 150 families affected by 22q11 deletion syndrome.

It was founded by Anne Lawlor after her daughter was diagnosed. The disorder affects one in 1,000 people.

Gary still hopes to make his target of €8,000. Donate at give.everydayhero.com/ie/ 100-mile-west-highland-way-walk-for-22qireland or see his facebook page.