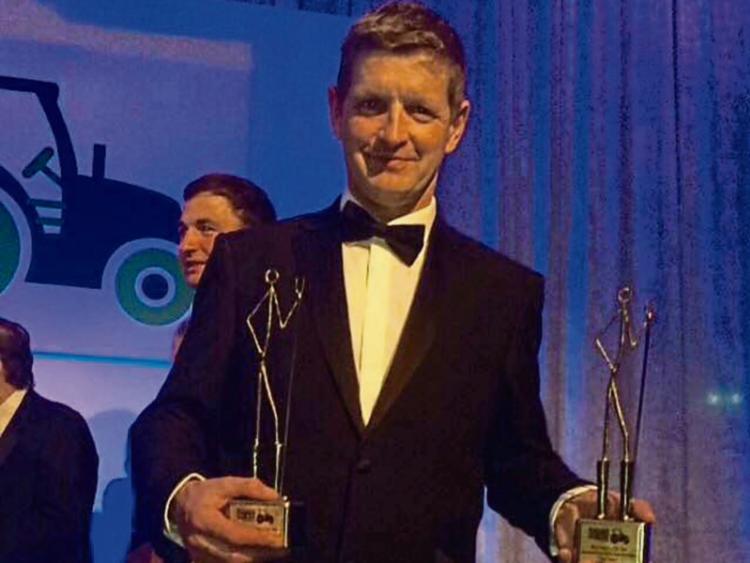 An organic beef farmer living in Durrow has been named as this year's Farmer of the Year.

Tom beat off a large field of competitors to emerge as the overall winner, after initially taking the honour in the Beef category, at the packed awards ceremony.

He was named Farmer of the Year for his beef operation that produces year-round supplies of organic beef for the Good Herdsmen organic processing beef facility, based in Cahir.

The competition attracted thousands of entries, before been whittled down to about 300.

The final selection process, which produced three farmers in each category, included a farm visit.

Tom has been farming organically for the past seven years, and his operation is now concentrated on finishing beef.

The transition to organic beef involved changing from his initial set up of sheep and sucklers.

“I finish about 80 cattle a year. I like to buy animals at around the 300 kilo weight, and I have a few farmers that supply me. I have not been short of cattle yet.”

He grows his own cereals for feed, which consist of a wheat and pea combination. With the addition of a diet feeder, and a back up diet plan from Keenans, he has seen weight gains in his stock increase.

“The turnover is increasing and the year is now five to six weeks less than what it used to be.

“It is a low cost system, with low inputs, and it is environmentally friendly.”

Tom is also a founder member of the Irish Organic Beef Producers, which was formed last year.

Consisting of about 30 members, it supplies 20 to 25 cattle a week to the Good Herdsmen in Cahir.

He is a firm proponent of organic farming, though admits it may not be for everyone.

“There is a perception issue around organic farming. Some may it as been off centre. In a way organic is the wrong name for it. It is no different to any other farming enterprise.”

Tom says he was stunned when he was announced as the overall winner on Friday night.

“It felt great to be there on the night as a finalist.”

Joining him on the night at the Ballsbridge Hotel was his wife Gemma and daughter Dervla, mother Mary and sister Anne. His other daughter Bronagh was unable to attend due to exams.