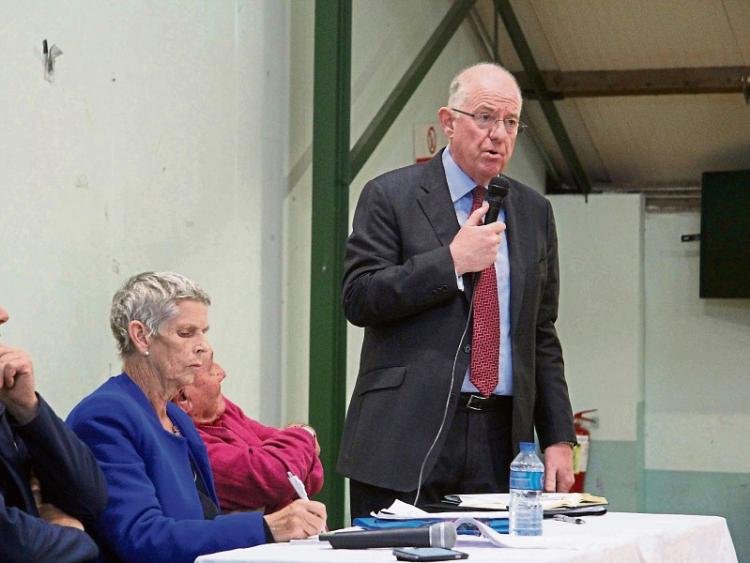 Downgrading Portlaoise's hospital through its A&E department is a non-runner, according to Laois TD and Minister, Charlie Flanagan.

Minister Flanagan came under a lot of pressure, but also got a lot of suppor,t to fight for the retention of services at the hospital at last week's public meeting.

He said he had not been consulted on the future by Dr Susan O’Reilly, or had he seen the report. He reported that she said the consultation is now in the process of beginning.

He said he did not accept that this was a “done deal” and that by no means had the Department accepted the report.

“I have been told by the Department of Health it has sought further information and has rejected parts of the report,” he said.

He could not see where the HSE would move 40,000 people who attend the hospital each year. He said he would not support a recommendation to downgrade.

“I don’t see this report as a runner. It is a non-runner. I wish to assure you of my help and assistance insofar as I can. But we need to broaden our coalition and get people at national level on our side,” said the Fine Gael Minister.

He said the people should have a say, but so also should people in the medical profession.

“I say that because there has been some adverse reports on Portlaoise hospital. We want to make sure that the services in our area befit the population,” he said.

He suggested that there would have to be meetings with the doctors who are the national clinical leads and are the key players in recommending what type of services should be located in Portlaoise.

“We are going to need support at medical and national level for this hospital which has suffered for many years,” he said.

“I want to record my utter dissatisfaction with the HSE. I said that at a public meeting last year and I see nothing from the HSE that has improved my confidence in a body that has not served this county well and has not served the 600 people working in our hospital,” he said.

He admitted that the final call on the hospital's future would rest with the Minister for Health.

He stopped short of putting his career on the line by voting against the Government on the hospital's future until he saw the plan.