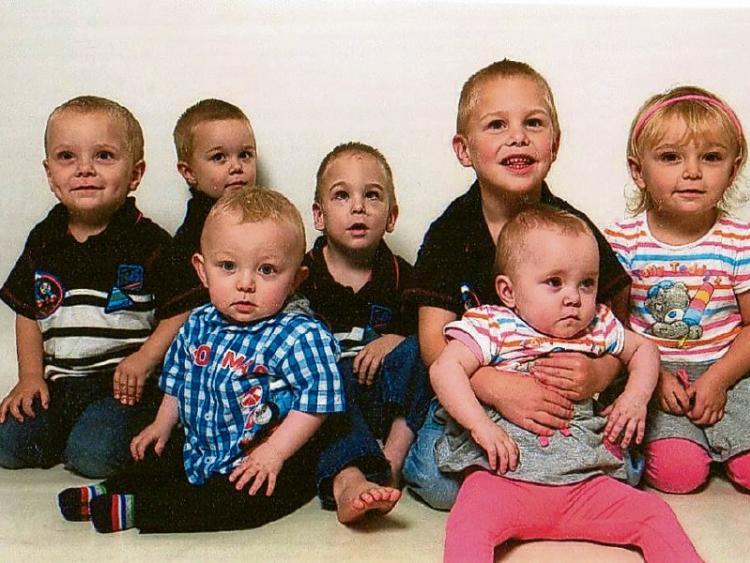 A fundraising event for the Doyle family will take place in in Kavanaghs (The Wren’s Nest) Portlaoise on Friday, July 15.

The fundraiser is part of a drive by a group of Portlaoise parents to raise money to buy a nine-seater car that can easily accommodate Michelle Doyle and her seven children.

The effort comes in the wake of the sudden death of 37-year old Christopher Doyle earlier this month.

Described as a proud and devoted father, Chris left behind him his wife Michelle and seven children, including, uniquely, three sets of twins.

The couple made headlines in 2012 when they welcomed their third set of twins, beating odds of 500,000 to one in so doing.

Poignantly, Chris gave up work to become a full time carer when his eldest sons were diagnosed as having special needs, acute learning difficulties and multiple disabilities.

His efforts on behalf of his children saw him awarded Ireland’s Dad of the Year in 2013.

Chris and Michelle were looking forward to renewing their wedding vows this coming August.

In the wake of Chris' sad passing, Michelle now finds herself running a very tight ship with seven children, all under the age of eight.

Consider the spectacle of seven pairs of shoes and seven packed schoolbags lining the hallway before school each morning, and the scale of Michelle's task becomes apparent.

The school run itself requires two cars, and two drivers, more than a seven eater.

In an effort to make Michelle and her children's life a little easier, a group of parents have organised the fundraiser in Kavanaghs on July 15.

They hope to sell 5,000 tickets for the event which will feature local bands, Blessed and Soulset.

Tickets will be on sale from your school’s office, in the Portlaoise Parish Centre Shop or can be bought directly from P.J. Kavanagh. Tickets cost €5 per person.

The group are also looking to local businesses for support and donations, and would like to thank the team at Mochua Print and Design in Portlaoise for their incredibly generous support.

If you or your business would like to donate goods or services to this cause pleasemake contact at DFSF@outlook.ie.

A special account in Bank of Ireland Portlaoise has been opened.

Donations can be made through online banking or lodged in any BOI branch using: