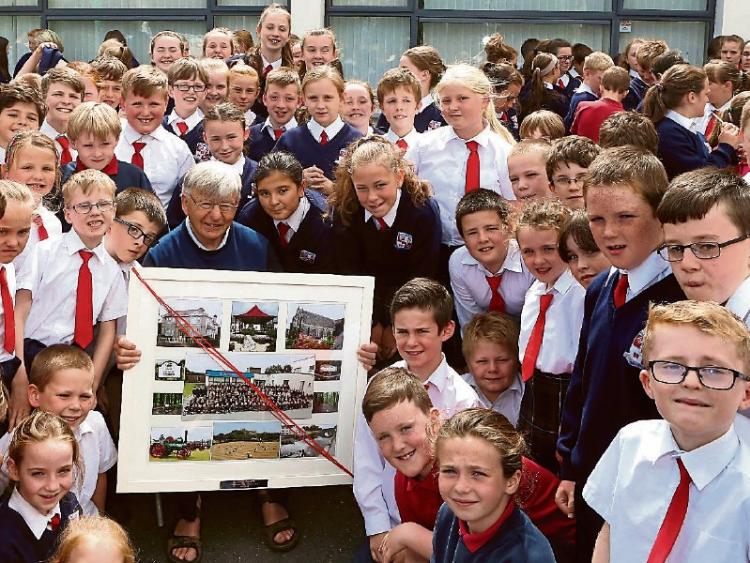 Parish Priest of Stradbally Fr Jim O’Connell was given a fond farewell by the pupils of St Colman’s NS last, June 23, fifty years and four days since he was ordained in 1966.

The school combined their 'end of year' mass with a celebration for the PP.

“It was a beautiful morning, they were all singing olé olé,” he said.

“He has been a fantastic Chairman and support to our school,” said the principal Cathal Ruane, who is himself moving on to a new post in Portarlngton girls school.

Fr O'Connell spent close to nine years in the parish.

“I really enjoyed it, it is a lovely parish, people were very supportive,” he said.

He had planned to retire and live in Mountrath, but has instead accepted a request to help out in Ballon parish in Carlow, where once he served as a young curate.

He is glad to leave the paperwork of administrating a parish behind.

“That’s a big relief, I will be still doing all the things I like doing, like saying mass and visiting the sick, but I will be taking it a bit easier,” he told the Leinster Express.

He is from Kilcavan in Mountmellick Parish, and his family still live there.

“I like going home every weekend, all my brothers and sisters and nieces and nephews are there, it’s my favourite spot,” Fr O’Connell said.

During his priesthood, he worked in Portlaoise parish from 1976 to 1989, where he established ‘St Mary’s Workforce’ a scheme to help the unemployed that saw the construction of St Mary’s sports complex.

He spent six years as chaplain in the Midlands Prison.

“I volunteered for that when the new prison was opened. I had been there before. They are no worse than us. It’s sad for their families,” he said.

He also served in Bagnalstown and as a PP in Paulstown, Kilkenny.

In that time, Ireland has changed dramatically.

“Everything is for the better. Maybe some people think there are not enough at mass, but the number who are going are very sincere. Without the pressure to go it is a healthier system,” he said.

He is not enthusiastic about the digital age.

“I remember when computers came first, they were saying it would give people more free time, but people only seem busier and in more of a hurry. People get too dependent on social media. They don’t seem to want to communicate with the person standing beside them any more,” he said.

His pleasures are in his friends, and a gentle meander on his bike.

“I am blessed with lots of friends, they help me to be happy,” he said.

His final word is of thanks to his parishioners.

“I would like to thank all the people of Stradbally, Vicarstown and Timahoe. the parish all supported me and made my work very easy,” Fr O’Connell said.

He departs on July 1. The new PP is Fr Sean Maher, a curate from the parish of Clonmore / Hacketstown.