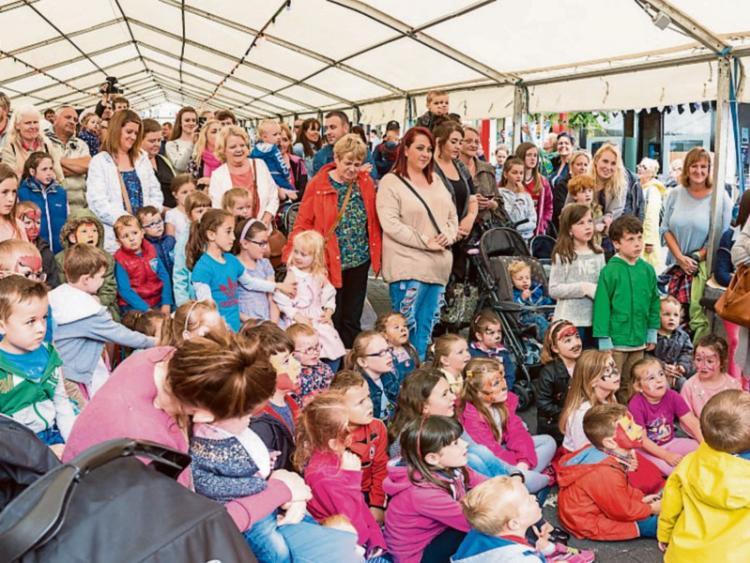 The Old Fort Quarter festival in Portlaoise over the weekend of Ireland’s final game in the Euros, is to be held again next year and be ‘bigger and stronger’.

Events included historic re-enactments, a blacksmiths and theatre and art workshops, all under a long marquee covering lower Main Street.

There was a last minute addition of a giant screen on Main Street, for Ireland’s soccer game against France in the Euros.

The event was rounded off each night with a host of local bands performing onstage until midnight.

The festival was funded by Laois County Council, supported by the Dunamaise theatre, Laois Heritage Society and local businesses.

At the council meeting the next day, June 27, Director of Services Kieran Kehoe thanked all who organised it and helped, noting that people were sweeping main street afterwards at 3.30am.

“I would like to thank our staff, and the Civil Defence. It promoted the heritage and was a great family event. Lets hope it is bigger and stronger next year,” he said.

Cathaoirleach Cllr Catherine Fitzgerald said it was ”a huge success”.

“It was a hundred percent supported by Laois County Council. People from all over Laois had a magnificent time and businesses came forward to support it. People want more of this, they were asking questions about Portlaoise’s history, and it was great to see them out enjoying themselves,” she said.

“It was a very well attended event, I was there Saturday and Sunday. There was a great friendly atmosphere, it was well organised, with great music. I hope it is the start of something big, compliments to the council and the tourism section,” she said.

“I compliment everyone associated. People came in large numbers from all different strands of the community,” said Cllr Willie Aird.

“There was 1,000 or more watching the match and it was an extension of what we saw in France, it was a great day,” said Cllr Noel Tuohy.

There are ong term plans to brand the walled 'Old Fort' section of Portlaoise as a cultural and heritage site.