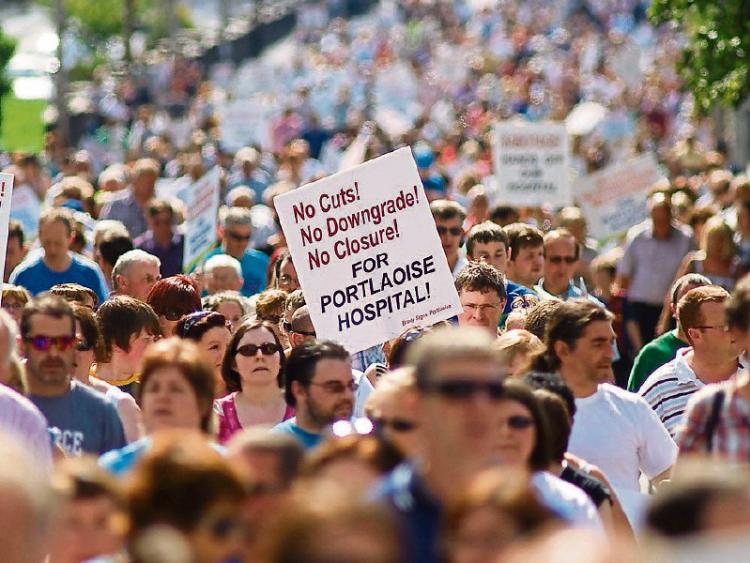 The Portlaoise Hospital Action Committee believe the time has come for action to defend Portlaoise in the wake of another report which they see as another attempt to downgrade services.

Kathleen O'Brien, Committee chairperson, believes the time has come for the people of Laois to march to demonstrate their opposition to moves to cut services.

She said the committee is very annoyed by the report leaked to the Sunday Business post which proposes that accident victims and other major trauma victims can be no longer taken to A&E units in Portlaoise, Naas, Mullingar, Kilkenny, Tipperary, Ballinasloe, Wexford , Cork and Cavan.

Some hospitals such as Portlaoise are already bypassed, but the proposal might only work if A&Es are downgraded and are closed.

“They are attacking the hospital every way,” said Ms O'Brien.

The Trauma Steering Group is due to complete its work later this year and present its plan to the Minister for Health, Simon Harris.

Ms O'Brien said the public is being left out of all consultations on hospital services.

“I can't understand it. All these reports but nobody has seen any reports,” she said.

She indicated that the campaign group would ramp up its campaign.

“It is time to take to the streets. That is what we will have to do. They keep chipping away and do not give us a straight answer on the 24 hour service. They keep saying patient safety first,” she said.

She said it made no sense to downgrade services at nine hospitals. She claimed people behind such proposals were out of touch with reality.

“They are just pushing pens. They don't see the reality of the situation and the danger,” she said.

She did not believe any political reassurances on the hospital. She said there were too many reports or plans about to believe that a downgrade was not being seriously considered.

“There is no smoke without fire,” she said.

No update was given on Dr Susan O'Reilly's plan for the hospital when it was raised a the Dublin Midlands Health Forum last week. No Laois councillor raised the issue with health managment.

Meanwhile, a spokesperson for the Dublin Midlands Hospital Group said the Trauma referral plan was separate from the proposals for its plan for the hospital which also refers to A&E.