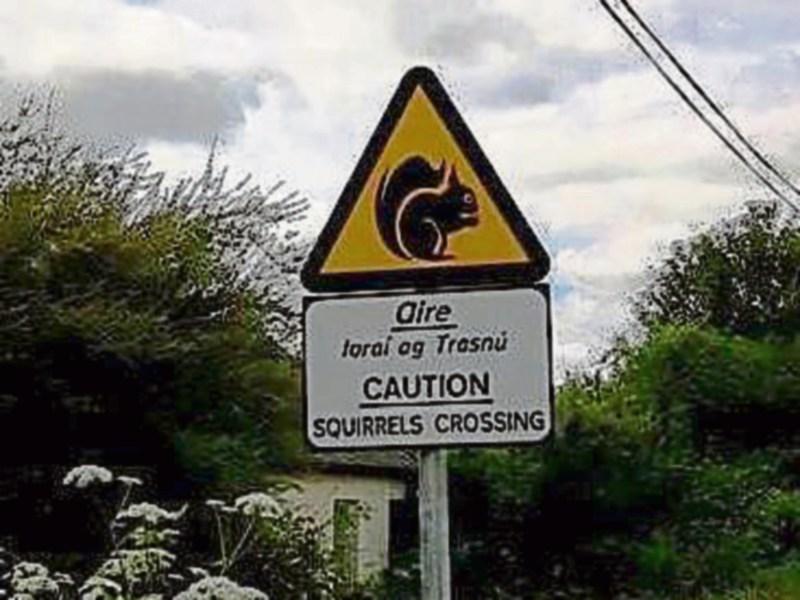 Less than a month since the first ever road signs to help squirrels cross the road went up in Laois, they have been mysteriously swiped.

On June 15 the Laois Offaly branch of the Irish Wildlife Trust had installed two signposts either side of the gates to Ballyfin House hotel, where the extensive woods are a favourite patch for the endangered red squirrel.

The signs had a serious side, as six young squirrels had been found dead on the road last year.

The squirrels were killed by passing vehicles as they attempted to cross the road to seek new territory at the end of summer.

While the signs with the wording 'Caution Squirrels Crossing' remain, two with images of a squirrel disappeared on July 13, to the disappointment of the branch.

“It is frustrating when we consider the effort that went into getting the signs up,” said chairman Ricky Whelan.

He is putting out a call for the return of the signs, no questions asked.

“They are probably in some student’s bedroom. I can see how people would think it was funny, I know it’s nothing sinister, so if anyone knows where they are, we would appreciate if they give them back. It would save us the cost of replacing them and we won’t be reporting them,” he said.

The signs and poles were erected with a grant from Laois County Council’s heritage department, at a cost of €350.

So far the missing signs have proved as hard to track down as the agile little creatures depicted on them.

“We are looking for a source of money to replace them. We will have replacements up in the next few weeks, hopefully before the end of summer when the young squirrels start to disperse,” said Mr Whelan.